Not that you can tell, but this bowl of Smoky Black beans was photographed on Sunday, outside the ice rink in my garden, otherwise known as my garden plot covered in snow.

I've made a deeply intense Black Bean Chilli before, but this one is very different in character. 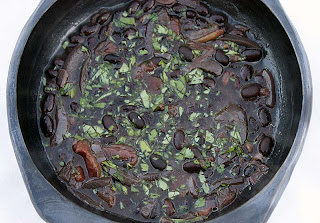 Its sauce is thin, yet it has heat and smoky overtones from the dried chipotle chillies.

So far, we’ve had this Smoky black beans three times this week. Ladled over plain Basmati rice, over jacket potatoes and with some home-made (bread machine) crusty bread. We still have plenty to feed us at least another two meals, if not three. I could have easily halved the quantity but with more snow predicted I knew it was going to be a hectic week at work, and that’s just the travelling to and fro. Its not the only dish I’ve made, I’ve also made some Quinoa cabbage rolls but that still sitting pretty in the fridge waiting to have a blast in the oven. 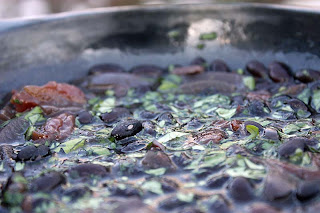 I was actually going to mince all the chipotle peppers, but D tasted a spoonful and said. Oooh I think that is smoky enough. I ended up fishing out the other two. After softening the onion and garlic in oil, I actually added all the ingredients to the slow cooker aka crock pot, but if you don’t have one these can easily be made on the stove too (see recipe below). 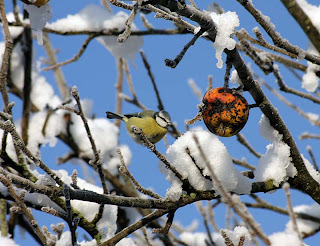 Whilst taking the photograph of the Smoky Black beans in the garden, D captured this little fella feasting on an apple in the tree. I know the apples are not perfect, but s/he doesn't seem to mind. 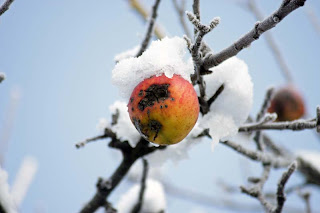 Smoky Black Beans
Serves a lot of people
Ingredients
500g dried black beans
3 1/2 pints water
2 - 3 chipotle peppers, dried and soaked in hot water for 30 minutes
2 tablespoons olive oil
1 large onion, finely sliced
3 - 4 garlic cloves, sliced
1 x 400g tinned tomatoes, chopped
Salt to taste
1 teaspoon cumin seeds
1 teaspoon freshly ground cumin seeds
Handful of coriander, roughly chopped
Method
Soak the beans overnight. The following day, drain and rinse them well.
In a frying pan, heat heat the oil, then add the onion and garlic and cook and soft. Add to a large pot, along with black beans, tinned tomato, chipotle, cumin and water. Bring the mixture to a boil, then turn down the heat, and simmer for an hour, then add salt to taste. Cook for another hour or until the beans are tender.
Retrieve the chipotle peppers from the pot. Mince either 1 or 2 and return them to the beans. Add the coriander and simmer for a few minutes before serving. Adapted from Didi Emmons Vegetarian Planet.