The past two months or so, I have been relying on public transport to get me to and fro work as D has had the car driving back and fro to Essex to be with his mother. The past two weeks he has been home with me in Snowy Scotland, so I have had access to the car. However, due to the amount of snow - weather forecasters described the roads in the Central Belt of Scotland as treacherous and dangerous to drive on, so driving in these conditions was best avoided. I continued with public transport (both train and bus).

On Monday, I got into work, looking almost like the abominable snow-woman, my purple coat turned white by the sudden flurry of falling snow. I stepped into the foyer and shook like a dog shaking off excess rain water from its fur. Getting home on Monday was such a nuisance, unlike some of my colleagues who got stuck on roads described in the local and national news as 'gridlocked’ (where no vehicles, including buses were moving). I managed to walk to the city centre. It took me about an hour treading slowly through the snow. When I got to the train station, the train was cancelled. It was 2 hours later when one came and I was back in the warmth of my home. (I was one of the fortunate ones who got home that evening, many were stuck on the snowbound roads). The past three days have been similar..transport links cancelled, or heavily delayed and me with many others trudging in the snow to get to work then home. This morning with the roads slightly clear from snow, D decided he was going to drive me into work, but when we got into the car the battery was flat. We have no friends living near by, so no one could help us with jump leads to start the car. We don’t have home start on the car insurance, so we will have to pay a vehicle repair centre to get us moving again. Anyway, I left the car worries to D and walked down to the train station again…to play ground hog day with the bleak travelling conditions.

The ice and snowy weather looks like it here to stay for a while. Right now though, I just want to say Thank goodness for the weekend. 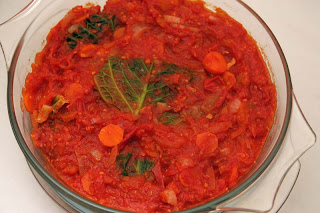 This dish looks much better served on the plate than it appears here. Tucked beneath the deep red tomato vegetable sauce are bundles of green. A bit like a treasure chest covered green in moss and seaweed, once open it inside you will find edible beads that will delight and surprise your taste buds. I am not a devotee of quinoa, but even I have to put my hands up and say that the quinoa chickpea filling in these cabbage parcels was surprisingly tasty, elevated by the salty-stringiness of the melting Gruyere cheese. 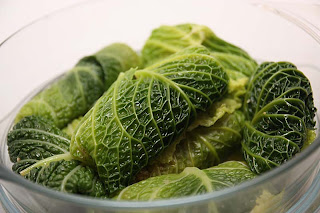 I don’t usually have problems wrapping lettuce, cabbage or Swiss chard leaves around vegetable or grain fillings, but for some reason I was feeling rather incompetent at this task. I seemed to have cut off more of the stalk than necessary, as the filling was not well contained and easing out a little. My attitude was a little non fussed and forgiving really. I thought what the heck, I was only feeding D. Funny how once upon a time you do your utmost to win the heart of the person you want through ‘the aesthetics of good food’ but then when you've trapped them under your spell (and won their heart so to speak), its not so much about presentation, but about sustenance and taste. 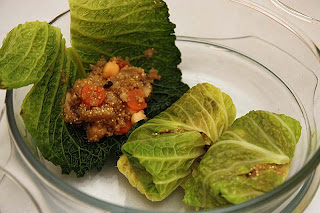 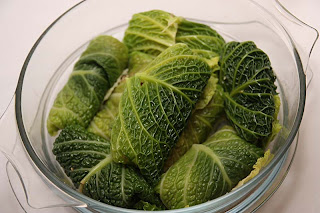 Method
Heat the oil in a pan. Add onion, celery, carrots and garlic. Cook over a medium heat until softened. Set aside half of the mix in a bowl. Then add the chestnut mushrooms to the pan and cook for a few minutes. Add the quinoa and cook for a minute, stirring all the time. Pour in the stock and season with salt and pepper to taste.
Bring to the boil, reduce the heat to a simmer, cover and cook for about 20 minutes or until most of the liquid has been absorbed and the quinoa is tender. Once cooked, adjust seasoning if necessary and stir in the chickpeas.
Fill a large pan of water, add a pinch of salt and bring to the boil. Using a small knife, carefully remove the core from the cabbage, peel away 8 – 12 leaves and cook in boiling water for 5 minutes or until softened. Drain.
Remove the tough centre stalks for each leaf, and lay the leaves on a work surface, vein side down. Place approximately 2 heaped tablespoons of quinoa mix on one half and the leaf, and roll up, folding the sides in as you form a parcel. The size of the leaves will differ so fill and wrap accordingly. Place in a large ovenproof (casserole) dish, seam side down.
Return the softened vegetables that were set aside to a clean pan and add the chopped tomatoes and bring to the boil. Reduce the heat and simmer until reduced by half. Pour over the stuffed cabbage leaves, cover with lid or foil and cook in the oven Gas Mark 4 until tender, about 40 minutes. Serve hot, sprinkled with Gruyere cheese. Adapted slightly from Maria Elia The Modern Vegetarian.