For many of us living in the U.K, the shapely squash like its crown shaped brother, the pumpkin is still a new ingredient to us. Its only in recent times that we have begun to invite it into our homes. It appears in our kitchens on Autumnal days, often welcomed with the invitation of Halloween or Bonfire nights. 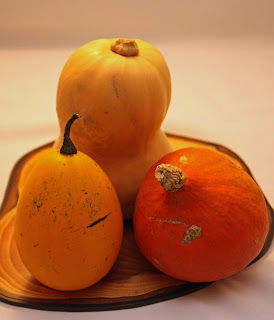 (Above: Butternut Squash, Golden Apple Squash and Uchiki Kuri squash). Before discovering my culinary teeth and becoming an adventurous and experimental cook, I recall having had butternut squash twice in my entire life and both times were as savoury dishes - Butternut squash risotto, and a Butternut squash and ricotta pastry. I was not keen on either of them. I thought its sweetness was best suited for American pies, and other sweet bites such as muffins and cakes. Then a year or two later, my approach to this sunset orange fleshed vegetable completely changed and I began to explore its versatility - Thanks to Denis Cotter. I credit Denis Cotter for changing my mind and attitude to both the pumpkin and (butternut) squashes in savoury dishes. Now one of my favourite ways of eating this vegetables is roasted with spiced chickpeas. 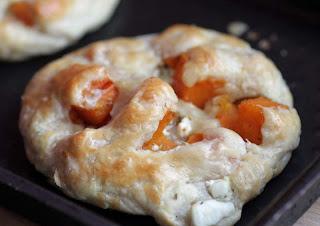 Anyway, I decided to revisit the savoury butternut pastry recipe. The only thing I tweaked was to substitute the ricotta with feta cheese. It was a good light snack. The sweetness of the butternut squash complimented the salty robust feta.

As you can see in the photograph above, the sweet and salty filling in my pastry is well exposed. The ready rolled puff pastry I had purchased this time, let me down. It was sticky and just too soft. Despite the filling oozing out, these pastries held well and turned out pretty good. Maybe I should start a new food trend and call them an 'open pastry' (like an open sandwich). 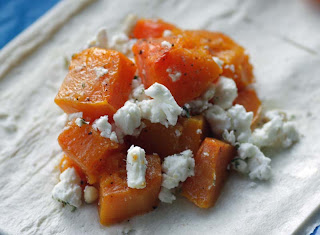 D’s mother had a taste. I don't think she liked it much. She commented on the flavour of the butternut squash ‘its an acquired taste’. I agree with her, it certainly is – but if you let allow it, it may just grow on you. 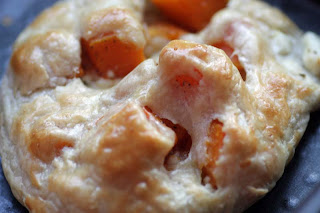 Recipe for Butternut Squash and feta pastry
I made this recipe with the ingredients I had at home, so cannot remember the exact quantities. I used half a butternut squash, peeled and cut into cubes which I then roasted in the oven until soft. Set aside to cool.
In a bowl, I crumbled about 100g of feta cheese, with a sprinkling of dried oregano and freshly ground black pepper. I added the cooled butternut squash to it and combined well.
I spread out my ready rolled puff pastry and cut into 6 squares, then filled and formed into a pasty shape of sorts, brushed it with a beaten egg and then baked in the oven at Gas Mark 6 for 20 - 25 minutes or until puffed up and golden. Serve warm or at room temperature.