Around this time last year I was able to 'force' some of my own rhubarb. It was incredibly delicious, but in the process of ‘forcing’ it, I think I may have killed my rhubarb plant. I actually grew it from seed and was so proud of it. Instead of being considerate and letting it get become strong and established, I greedily demanded it produce some luminous pink forced rhubarb. Early this year, when I went to check out its progress in the corner of my garden plot. I noticed my rhubarb plant was no more. Maybe it was me exerting so much pressure upon it, maybe it was the dingy corner it was in, or maybe it was just the cold weather. I have replaced it with a 'Timperly' variety, but I won’t be able to reap any of its benefits until next year.

Anyway, this year I have been patiently waiting for this seasons crop of rhubarb. It slow appearance at the grocery stores, farm shops and supermarkets has been blamed on the unusually cold weather which included a lot of snow. Those that had appeared on the shelves were of course imported, until early this week when I spotted some English rhubarb. Most of the rhubarb grown in England is grown in a small area of West Yorkshire between Bradford, Leeds and Wakefield famously dubbed as the ‘Rhubarb Triangle’. The Scottish ones have yet to grace the shelves. Maybe I’ll find some this weekend?!

Well as much as I tried to resist, I just could not walk by and ignore this English rhubarb. Its seaside sticker rock pink allured me and the thought of its sharp mouth-puckering goodness, well just tempted me. 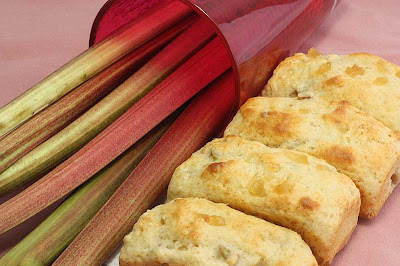 Now that I had it in my bag, I wondered what to make with it. I could just make a crumble, a cake or even a tart, but with the weather being warmish, neither appealed to me. Instead I decided to make some simple 'rhubarb and ginger loaves'. These are really airy light muffins made in individual loaf tins. These are not overly sweet, instead allowing the flavour of the ginger came through and the rhubarb, ahhhh was just delightful on the tongue. 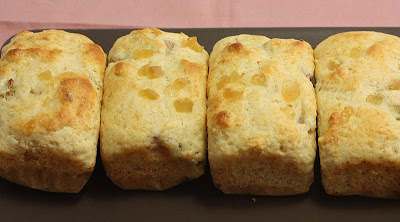 Rhubarb and ginger loaves
Makes 10
Ingredients
260g self-raising flour
1 teaspoon ground ginger
1/2 teaspoon baking powder
1/2 teaspoon bicarbonate of soda
110g caster sugar
140g - 150g fresh rhubarb, chopped
1 egg, lightly beaten
284ml buttermilk
4 tablespoons vegetable oil
2 tablespoons of crystallized or preserved ginger, cut into pieces
Method
Into a large bowl, sift the flour, ginger, baking powder, baking soda and salt. The stir in the sugar and rhubarb. In another bowl, mix the egg, buttermilk and vegetable oil. Then add the wet ingredients to the dry ingredients and mix briefly until just combined. Spoon the batter into the loaf tins, or muffin cups, then sprinkle evenly with the crystallized ginger pieces. Bake in the oven for 20 - 25 minutes, or until well risen and golden. Cool in the pan for 5 minutes, then turn into a wire rack. Best eaten on the day.