A little gardening and a little farming

Yesterday was another busy day playing tourist in Scotland. Well why not, the sun was shining unlike today.

The first place was Greenbank Gardens. Greenbank Gardens is just over five miles south of Glasgow city centre. The Walled Garden was gifted to the Trust in 1976. It was originally designed to grow vegetables and fruit, but these days its mainly flowers and shrubbery. The garden hosts about 12 domestic sized beds, each focusing on a different theme. I liked them all, but for obvious reasons I liked the herb garden the most. All of the beds were divided by tall plants and ornamental hedging. The garden boasts over 3,700 plants depending on the season. These include spring bulbs, apple and cherry blossom, astilbe, dahlias, roses, azalea, rhododendron and many others that I have yet to learn. Again we took loads of colourful pictures, but had to be selective. 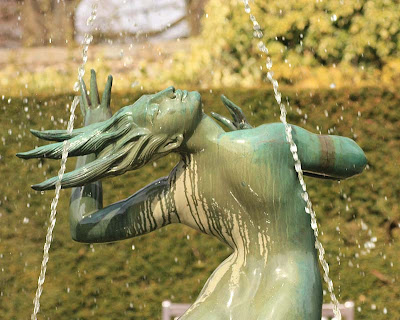 The sound of water leads you to this rather sexy looking Green water nymph. I apologise, I can't remember here official name, but she was originally displayed at the Empire Exhibition in 1938, an international exposition held in Glasgow before she found her final home here. She is rather elegant. 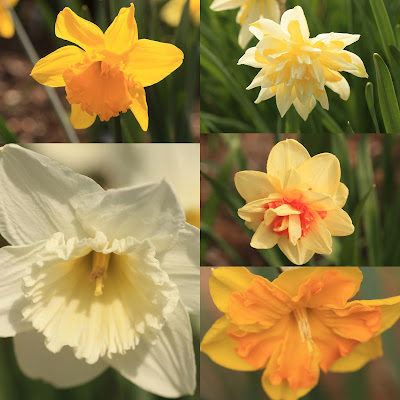 There are over 447 varieties of Narcissus in this garden, also known as daffodils to the likes of me. These are a few that charmed me. There was also one in a peachy colour. 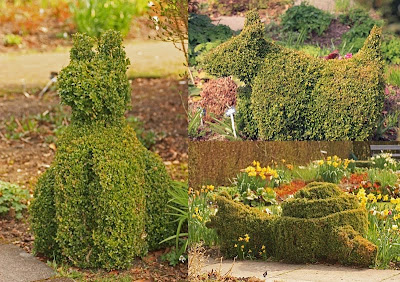 Here are a few topiary animals: a rabbit, a snail and a wee Scottie dog (we think) unless its a terrier. All of them could do with a trim! 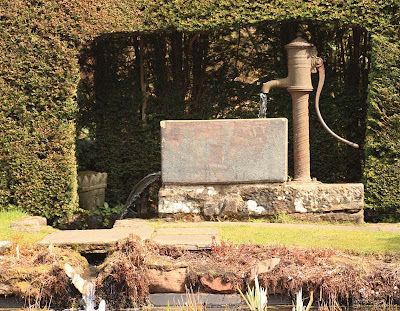 An old fashioned water pump. The greenhouse was closed so we couldn't see what was inside it. 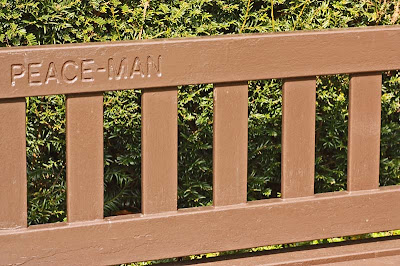 Many of the benches here were dedicated to people who have passed away. 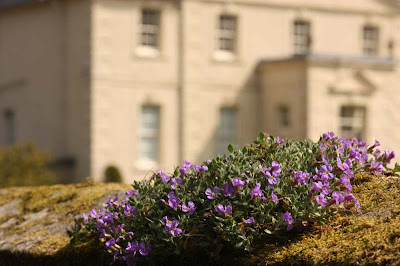 We spent a lot of time in the walled garden and even ate our sandwiches under the cherry blossom tree, only because we wanted to enjoy the blazing sunshine. But the history of Greenbank House is just as interesting. The house and its walled garden were originally built for a local man called Robert Allason in the 1760s. Before he set up with his brothers as traders and merchants in Port Glasgow, Robert was originally a baker. This later extended into land holdings, slavery and tobacco in the Caribbean. Of course, like those who participated in the Slave Trade, this made the Allasons very wealthy. It was from the profit of this, that Robert was able to return to his hometown and establish Greenbank House. There are a number of historic buildings in Scotland that have roots in slavery. 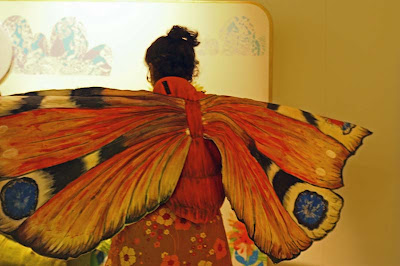 Anyway, after enjoying the sunshine and the beauty of the grounds. We drove to the National Museum of Rural Life. I had fun playing a butterfly. Now this is a costume I wouldn't mind wearing. I think its so much better than playing a princess. 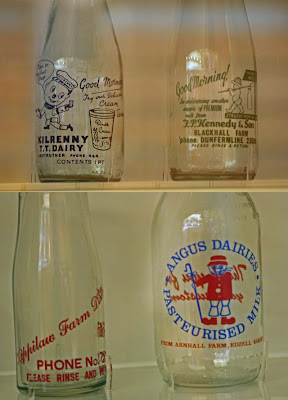 The museum displays a number of farming artifacts from across Scotland including tractors. Here are some things that caught my interest. Some old fashioned milk bottles. 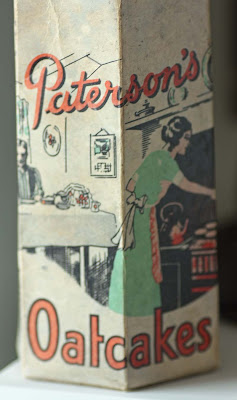 Original packaging for one of the Scottish Oatcake brands. One of these days, I must try and make some of my own. The depictions below were interesting. 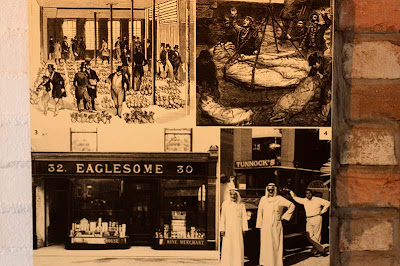 1. An auction of a West Indian Pineapple in 1844 2. Frozen meat being unloaded from Australia 1881 3. Italian Warehouse, Campbeltown c1910 4. Scottish food exports. These days we are fortunate to be able to access fruit, vegetables and ingredients from all over the world. We have so much choice and have become more worldly through different cuisines. However the importing of affordable food, has had an impact on home-grown produce. Unfortunately, we Brits eat more fruit and vegetables from overseas and less of what is grown in the U.K. Why is that? I know the reason, sometimes an imported cauliflower is much cheaper than one produced locally. 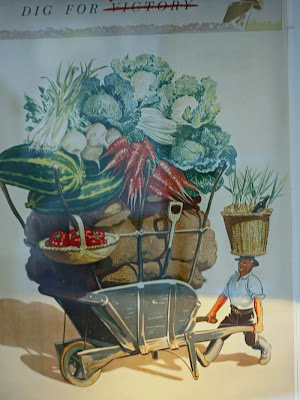 After having a wander inside the Museum, we took a rather bumpy tractor ride described as 'the Doogly Shoogly' up to the 1950s style working farm and farmhouse. I thoroughly enjoyed the tour of the farm with its Ayrshire dairy cows, black face sheep and skippy lambs, Tamworth pigs and clucky hens. 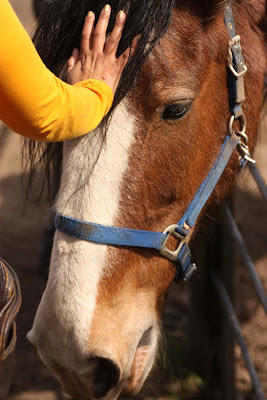 A handsome Clydesdale horse gifted to the farm from someone who resided in the Isle of Arran. I think she was wondering where her sugar cubes were. I didn't have any to share. 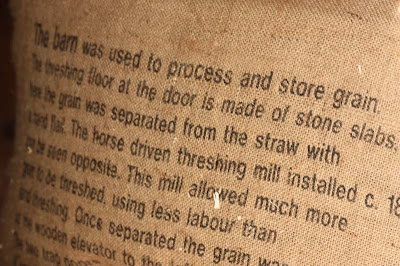 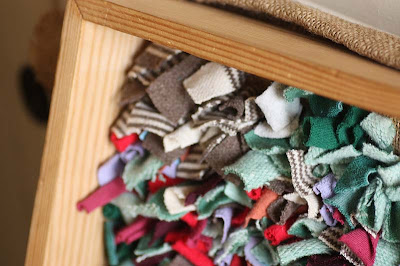 Inside the farmhouse, the lady informed us about some traditional thrifty crafts. This image shows the process of making a mat from recycled rags and a jute sack. 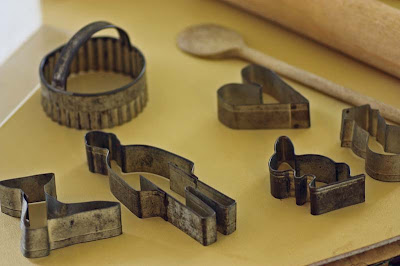 Some old fashioned cookie cutters. Now that is one straight ginger man, and a very tough looking boot. 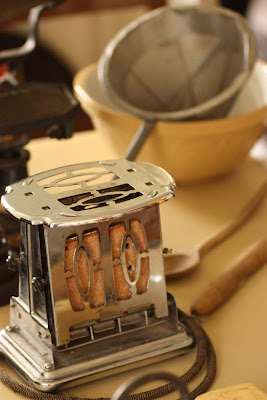 Isn't that a classy looking toaster?! 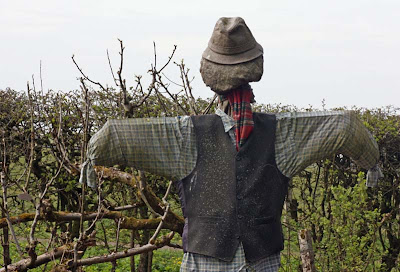 Then into the vegetable patch. Not much growing at this time of year as you would expect, but you could see the blackcurrants, gooseberries and rhubarb. 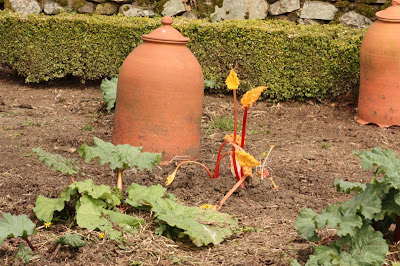 These rhubarb forcers are wonderful. Last year when I forced my rhubarb, I used an upturned plastic bin. It may not have been very pretty to the eye, but it worked very well. Still I envy these sturdy rhubarb forcers. MMmmm can't wait to eat some seasonal rhubarb, sweet and sharp.