For those of you who live in the U.K, the title may suggest a homage to a chewy toffee chocolate strip called Curly Wurly. So called because of the squiggly pattern you saw upon unwrapping the bar. It certainly was one of my favourite childhood chocolate treats. I recently learned that Curly Wurly was voted the best 'retro' chocolate bar in the U.K. Anyway, as much as I would like to share some of my childhood memories of eating this sweet, chewy, melty chocolate bar, I must not get distracted. Instead I shall focus on the much healthier vegetable that shares part of its name with the curly wurly, the green leaf known as curly kale.

Curly kale is a member of the same family as cabbage Brassica oleracea. Kale is such a robust crop and another good one to grow in if like me you live in a cold region as its pretty resistant to frost. It comes in purple and green, flat leaved, crinkly and curly. I personally prefer the taste of curly kale much more than Cavolo nero aka black kale. Kale is also a good alternative to cabbage or spinach and its quite versatile too. I was originally going to make a hearty curly kale and dal soup, but changed my mind as the weather seemed to be changing. 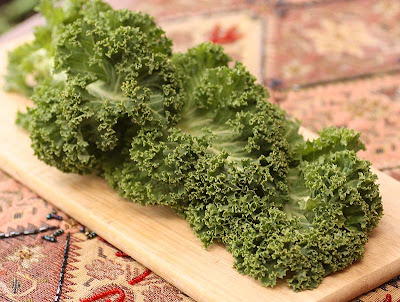 Instead I made this Sauteed mushrooms, kale and chickpea. For those of you who have been reading my blog for a while, will know that I am slowly dipping my culinary toes into the Oriental larder. I am trying to become adventurous in my use of some of the bottled ingredients, namely sesame oil, peanut oil, Teriyaki and plum sauce which are all still relatively new to both my taste buds and nose. 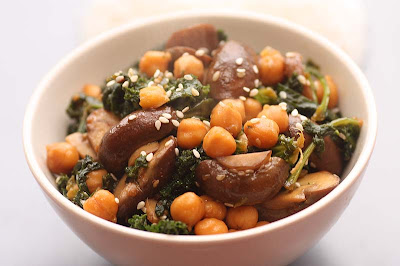 Now I know what you see below cannot be claimed as Oriental cuisine, but the writer of the original recipe describes the dish as a stir fry, because it is cooked in that manner. I’d probably just describe it as fusion food. Anyway, I have to admit I really actually enjoyed the flavours in this dish. It was a welcome change as the past few days I have eaten a lot of dairy based dishes and this one was vegan. 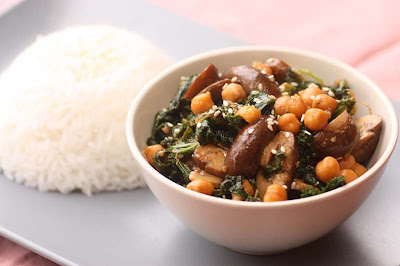 Sauteed mushrooms, kale and chickpeas
Serve 2 - 3
Ingredients
2 tablespoon olive oil
250g chestnut mushroom, sliced
250g curly kale, pulled of the stalks
2 cloves of garlic, crushed
1 x 400g tin of chickpeas, drained and rinsed
2 tablespoon sesame oil
2 tablespoon Tamari or soy sauce
2 tablespoon sesame seeds
Black pepper to taste
1 tablespoon of spicy chilli sauce (optional)
Method
Heat the olive oil in a wide pan, add the mushrooms and cook for a few minutes, until it starts oozing out its juices, then stir in the kale and cook for about 15 minutes until the kale begins to soften, add the garlic and cook for a couple of minutes, before adding chickpeas, sesame oil, soy sauce, sesame seeds, pepper and optional chilli sauce. Cook on low heat for a further 5 minutes for the chickpeas to heat through and the flavours to infuse. Then serve with plain boiled rice. Adapted from Barbara Kafka Vegetable Love.