I've had Brownies many times in my life, but never a Blondie!

It was D's first time too. 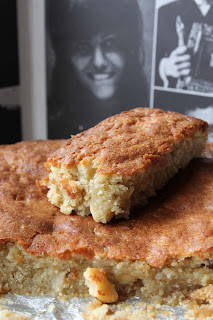 Well these blondies so named as they are made with white chocolate, instead of dark chocolate were creamy gold and squidgy soft like fudge .  I have to admit I found them extremely sweet.  Still I ate them, namely enjoying the milky nuttiness from the chunks of Brazil nuts and hint of banana.  As for D he liked them, but not as much as he likes the traditional chocolate brownies.  So I don't think I'll be making them again in a hurry.  Our preference is definitely for the dark chocolate brownies.

I also found them quite hard to photograph, still here they are for you to get an idea of what they look like. 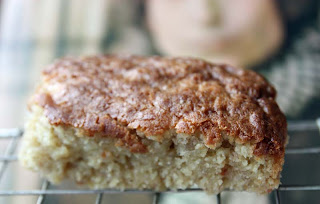 75g Brazil nuts, roughly chopped
Method
Preheat oven to gas mark 5.  Line the base and sides of a 8 inch square baking tin with parchment paper.
Melt the butter and white chocolate in a double boiler or heatproof bowl over a pan of hot water, making sure the bowl is not touching the water.  Take off the heat.
Mash the bananas in another bowl and mix in the sugar, the egg and vanilla.  Add the melted chocolate mixture and stir until smooth.  sift in the flour and baking powder over the mixture, then fold in, together with the chopped nuts.
Scrape the mixture into the prepared tin and bake for 40 - 45 minutes until golden on top, with a slight wobbly middle.  Test with a skewer: its should come out with a crumb, not gloopy.  Place the tin on a wire rack and leave to cool until cold. This recipe is adapted from Tamasin Day-Lewis who in turn adapted it from Dan Lepard. ﻿