Well I haven't been doing much 'digging for my dinner', but I have certainly been busy foraging. 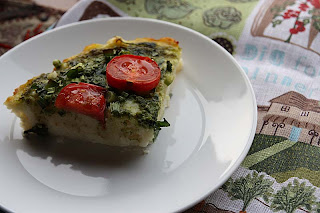 One of the obvious ways to use pesto is by coating pasta.  For this recipe, I had a mound of Maris Piper potatoes growing little eyes and ears, instead of lobbing them in the compost bin, I removed the unsightly additions, peeled the potatoes, washed, boiled and mashed them to serve as a base - a bit like a pizza base, except this one is made from potatoes and then it was generously basted with homemade Wild Garlic Pesto, then topped with sliced the first of the British grown tomatoes.

The Pesto Potato Crust was a little reminisce of Cranks Homity pies.  Nevertheless this was a tasty and filling meal, but should I make it again it will require a little tweaking. I'd make the potato crust in a larger tin (10 inch as opposed to 8 inch round) as the potato base was a little too dense.  I'd also layer a little pesto between the mashed potato for taste and visual effect; or for ease just stir the pesto into the mashed potatoes so its well infused in flavour. 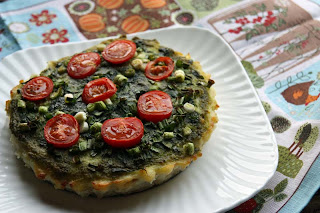 Do you like my Grow Your Own Tea towel.  My photograph is not doing much justice to it, but it depicts a dream of mine: a farmhouse surrounded with growing vegetables such as peas, tomatoes, carrots, pumpkins and strawberries, as well as chooks (hens). It comes from All Tea Towels.

Okay for those of your interested in creating this recipe at home.  Here goes.
Pesto Potato Crust
Serves 4 - 6 with accompaniments
Ingredients
900g Maris Piper or King Edward potatoes
3 - 4 tablespoons olive oil
1 egg
Salt and pepper
Method
Preheat oven to Gas mark 4.
Boil the potatoes in their skins.  Drain, peel, mash and add the oil, egg and season to taste.
Oil a 10 inch non stick flan tin and place on a baking tray. 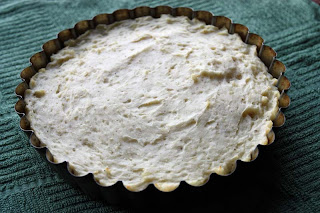 Press the mixture into the tin, coat with a little olive oil and bake for 20 - 25 minutes. Remove and allow to cool 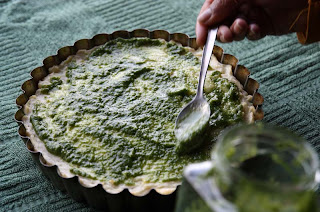 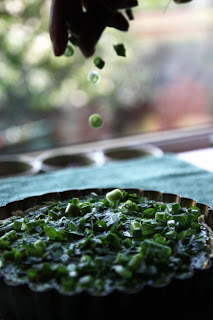 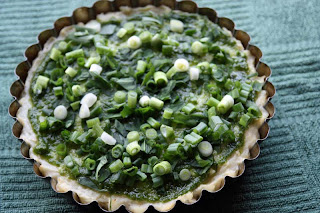 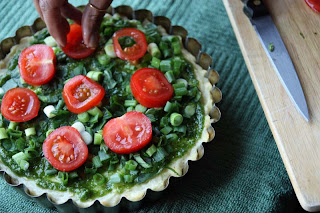 Cover with the sliced tomatoes.  Sprinkle with some Olive oil and season with salt and pepper.  Bake for a further 20 minutes. Allow to cook before removing from flan tin, then cut into wedges and serve with a green salad.  Adapted from Little Red Gooseberries by Daphne Lambert. ﻿