I was never much of an Oatcake nibbler until I made Scotland my home. 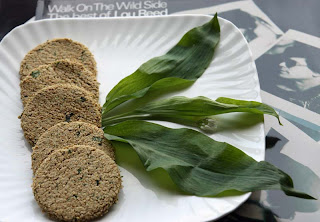 ﻿For those of you not familiar with Oatcakes, they are a Scottish flat biscuit traditionally made on a griddle (girdle in Scotland). They are made from oatmeal and tend to be shaped round, but you can also find them in triangular shapes.

Traditional Oatcakes are quite plain in taste, but its up to you to enhance them further. Plain Oatcakes serve as a firm base - Imagine pizza base - its what you put on that brings them up a notch or two, and for this reason they are versatile. Oatcakes can be served as a sweet with jam; as a savoury with cheese, chutney and a glass of wine; or simply with a little butter. 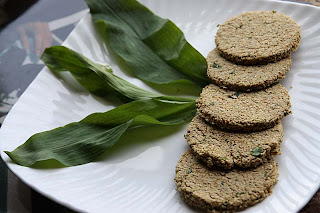 I've made a savoury version of the Scottish Oatcakes.  These Wild Garlic Oatcakes were inspired by Welsh Laverbread Oatcakes given to me by nephew early this year.

This was my first attempt at making oatcakes, and I wondered to myself why I had never made them before as they are quite a doddle to make.  These were crisp-dry, crumbly and the flavour of the wild garlic actually came through good and true. 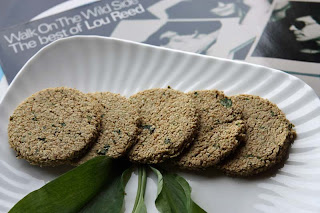 Wild Garlic Oatcakes
Makes about 12
Ingredients
1 tablespoon wild garlic, washed, blanched and then thoroughly minced
2 tablespoon butter or vegan margarine
140ml boiling water
225g medium oatmeal, plus extra for rolling
½ teaspoon baking powder
¼ teaspoon salt
Method
Preheat oven to Gas mark 5.
In a measuring jug, add the butter or margine, minced wild garlic and boiling water. Allow the butter to melt into the hot water and the wild garlic to infuse the butter-water liquid.
Whilst the butter is melting, put the oatmeal, baking powder and salt into a bowl, mix together and make a well in the centre. Pour the warm liquid into the well and mix together with a knife. Allow to sit for a couple of minutes for the water to thicken the oatmeal.
Then divide the mixture into two and lightly knead each piece on a board sprinkled with oatmeal. Roll out each and cut into 5 – 6 pieces. The edges will be jagged, but idon’t mind that. If you wish you can neaten them.  Place on an ungreased baking sheet and bake for 20 minutes, or until crisp and lightly golden.
Best eaten within a day or two.