You often read about my success with dishes, but here is one that was edible but still requiring a little tweaking.

Its a bowl of Tamarind Roast vegetables.  The vegetables include such as carrots, cauliflower, garlic and shallots were all fine, it was the tamarind.  I was a bit heavy handed with the tamarind, it overpowered the dish completely drowning all the other flavours. I also think it lacked a little green, so I will be making this again in the near future. 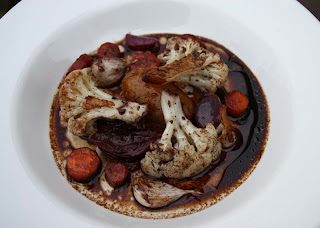 But its not all bad with tamarind.  Some of you may remember that last month I entered Tinned Tomatoes Slow Cooking Challenge and I submitted this (see below) Slow Cooked Tamarind Vegetable Pot with cumin dumplings to Jacqueline, well guess what?! 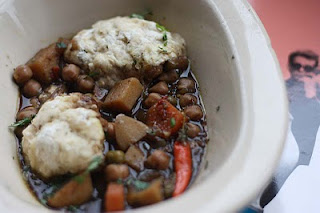 I won!!!
I won a 4.5 Litre Flavour Savour Slow Cooker courtesy of Jacqueline and Morphy Richards. When I learned that I had won, I left this comment for Jacqueline. '... I am absolutely gobsmacked I won your Slow Cooker Challenge. I'm really delighted. I so wish you could see the huge smile on my face and the way I am jumping up and down - Imagine a grown woman bouncing on one of those retro space hoppers yelling 'I've won, i've won!' - Well thats me! Thank you so much to you Jacqueline and to Morphy Richards'.

Email ThisBlogThis!Share to TwitterShare to FacebookShare to Pinterest
Labels: can be vegan, casseroles stews ragouts, tamarind