In the middle of the week, whilst D was checking out contents in the freezer he came across three tubs. One contained green and yellow beans, and the other two had frozen berries. One was a mix of blackcurrants and raspberries from the allotment, and the other blueberries, brambles and wild strawberries all harvested from the garden last year. This scuppered any ideas I may have had to go 'berry picking' this weekend, as I was given immediate instructions to use these first. 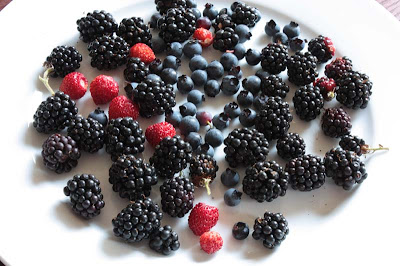 This photograph was actually taken last year around autumn time when the berries were fresh and gleaming. Unlike now, hard like acrylic imitation berry jewellery. Except for the wild strawberries that had turned to mush upon defrosting.

As you can see this small plateful of berries was not going to be enough for any recipe, not even the one I had seen recently in a magazine. So I included some of the other frozen berries found in the freezer, as well as a handful of wild strawberries from the garden that are still coming through fast. 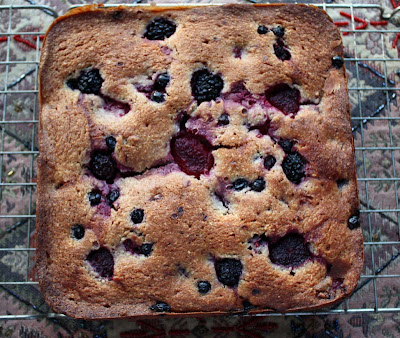 This cake was good, the ground almond gave the sponge a more dense texture. It reminded me of the Almond and blackcurrant cake I made around this time last year with the blackcurrants. Anyway, if you have some frozen berries to use up and like the look of this recipe, it came from here. I actually think this cake tasted better the day after.