Well on Monday work took me to the the East Neuk, or corner. So to combine work work a little pleasure, we took the tourist route up along the coast towards the East Neuk of Fife. East Neuk is one of the main tourist attractions of The Kingdom of Fife, Scotland. It is a stretch of beautiful coastline starting at St Andrews, followed by a number of fishing villages with working, yet idyllic harbours, such as Anstruther, Cellardyke, Colinsburgh, Crail, Elie, Largo, Lundin Links, Pittenweem, and St Monans. 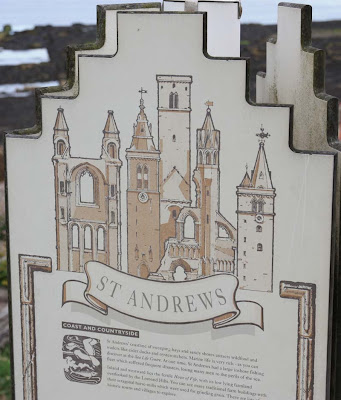 First stop was St Andrews Beach and I couldn't stop inhaling the smell and taste of the sea salt in my throat. 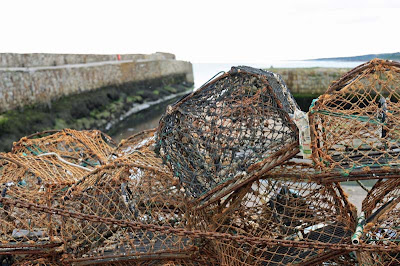 Along the coast you will find stacked fishing creels or are they crails?! Almost look like works of art. 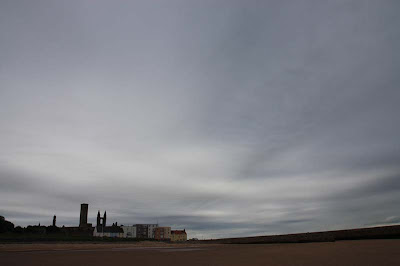 No woof woofing dogs allowed to run freely on this beach. 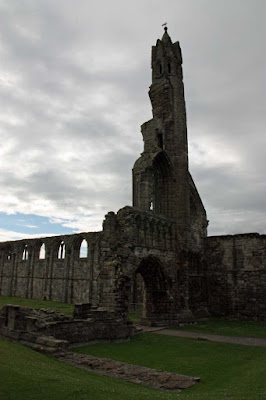 Whenever we seem to travel, the Scottish skies always seem to want to threaten to dampen us and make my wavy hair curly (which I secretly love). 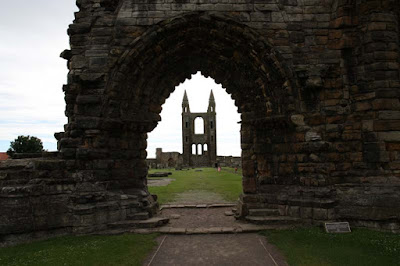 This time though, it didn't rain heavy, so we walked slowly towards these collection of ruins that make up St Andrews Cathedral. 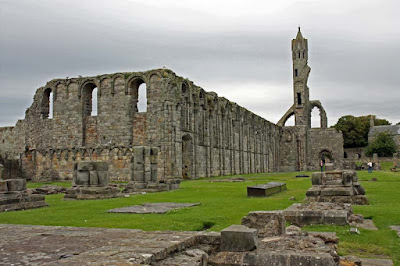 I enjoyed walking here, it was pretty quite. It was quite peaceful as there were not too many tourists like us about. For the golfers amongst you, this is Tommy Morris's grave. 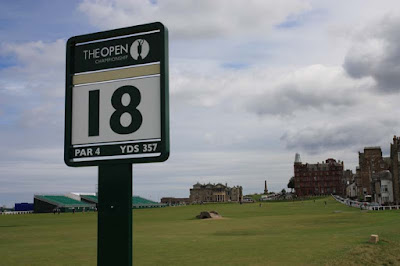 We couldn't leave St Andrew without our own trophy photograph of the world famous course (that's golf course, of course!). 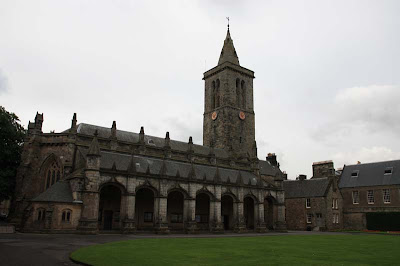 as well as a quick visit to St Andrews University quadrant. I'm a little biased. I went to Glasgow University and think the quads there are just, if not even more impressive. Our next stop would have been Crail which has been described to many as having the most photographed harbour in Scotland, but it didn't happen as we missed our turning and continued onwards bound to Anstruther, prounounced an-struther. Locals call it enster. I read somewhere that in Gaelic Anstruther means ‘the little stream’, if this is wrong I am sure a Anstruther resident will let me know. 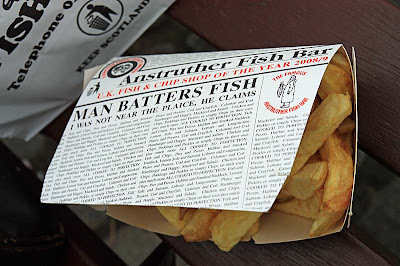 Well you've all heard the saying when in Rome, do as Romans do. Well when a tourist in Anstruther, do as tourists do - have yourself a fish supper, or if your a vegetarian or vegan 'a chippy'. The seafront is full of chip shops vying for your custom, the busiest of them all was Anstruther Fish Bar. Many of you will have heard of it has won numerous awards since 2000, namely for serving the Best Fish supper in Scotland and even the U.K. For those of you who live overseas. A fish supper in Scotland means a large portion of chips with two pieces of fish. In Scotland the fish traditionally served is haddock, whereas down South it was traditionally Cod. 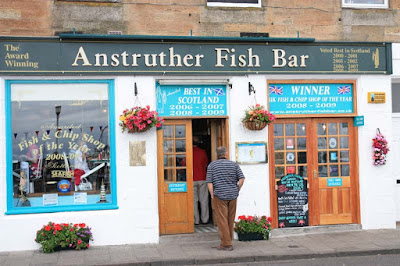 Apparently the queues for its takeaway fish supper run for yards along the street at weekends, well this was a weekday and I couldn't see any sign of a queues, until of course we walked in. Oh my goodness it as busy for both the restaurant and the Take-away. I was happy to go elsewhere as there was not a shortage of other chippies on the street, including the Wee Chippy that is popular with the locals and was voted by the Observer last year as the best place in the world to eat fish and chips, but D's attitude was now that we were in the queue, we'd see if the chips were to our liking. 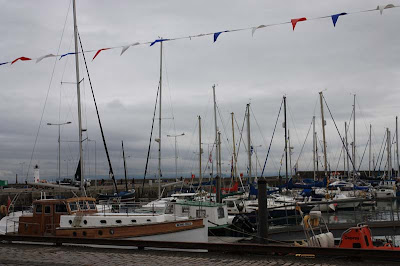 Before tucking in and admiring the view of the harbour opposite us, I insisted that D take a photograph of our rather generous portion of chips. Now onto the taste and flavour. I have to admit, though fresh, I actually was not keen on the potato, it tasted a little waxy for me and for this reason got a thumbs down from me - but hey that is my opinion, all those awards can't be wrong and its about the fish supper, not so much the chips. But before leaving Anstruther, I did get to eat some rather tasty chips (read on). 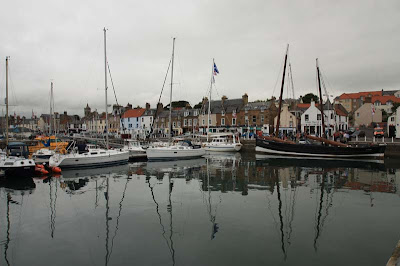 One of the impacts of having an Award winning eatery in a small place, whether a chippie, restaurant inspired the other places around it to 'raise their game too'. So yes, I have to admit I did get to enjoy some of the best chips I've ever eaten in Anstruther. In the evening, D and me went for a meal, well affordable pub grub. D of course this time had to have a fish supper and me more chips. Oh my goodness these were good and rather tasty. The potatoes were fluffy on the inside and the chips scuffed a little with a coating and so crisp. So where was this place. It was The Bank Bar and Kitchen. It didn't have much in the way of vegetarian options, but eck the chips were good. 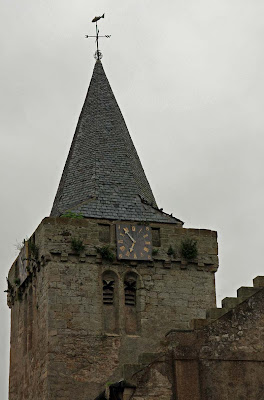 Being once a fishing community, you could see traces of its history in the buildings. Just take a look at this weather vane in the shape of a fish. 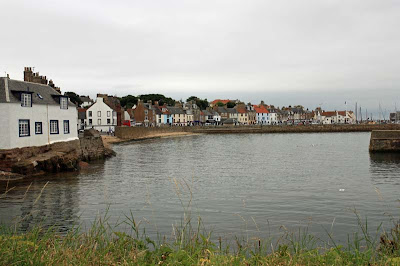 Away from the harbour 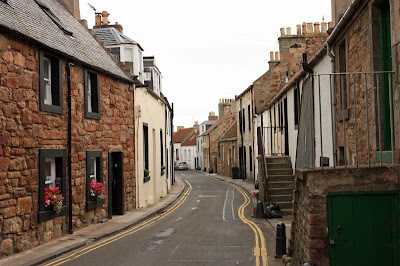 to the streets of Anstruther 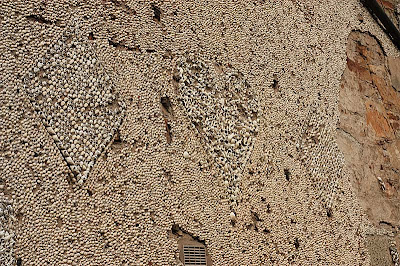 I was enchanted by these. Can you guess what it is, there a little aged, (click on image). Its a wall covered completely with shells. This wall is decorated in the design of diamonds and a heart. 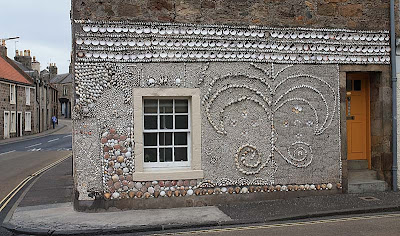 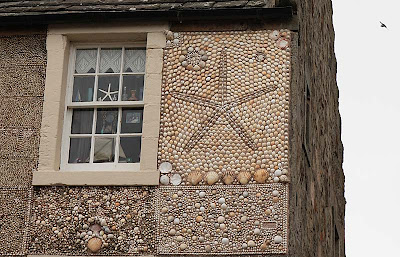 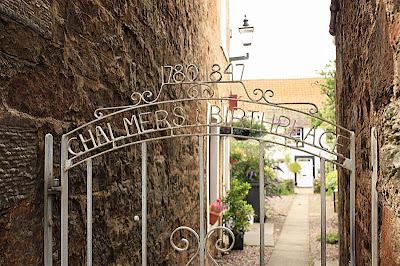 For those of you this is the birthplace of Thomas Chalmers, one of Scotland's most famous sons. He was the leader of the Free Church of Scotland. 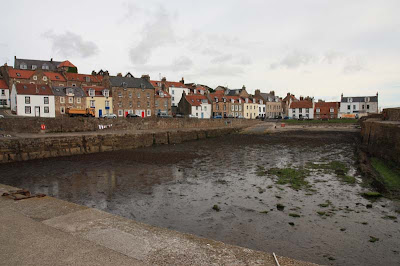 This place won't mean much to anyone but it does to me, it was my first visit to East Neuk. I used to work for an organisation that encouraged young people from socially disadvantaged backgrounds to access the outdoors, both for enjoyment and for therapy. One of these active trips involved practicing kayaking in this safe little spot. 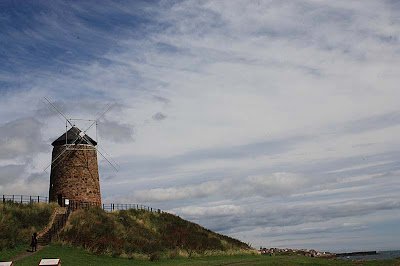 Yesterday, after fulfilling work commitments it was homeward bound. We stopped briefly at Elie and Pittenweem where the High street looked rather festive in a summery kinda way, dressed colourful in bunting. Then finally in St Monan, from a distant we got attracted or should I say distracted by a rather unusual sight in Scotland, a windmill that we just had to have a closer peek, especially as I had never seen one up close. As I got out of the car once again I was inhaling sea salt. Within a few minutes of climbing up the spiral staircase to the top of the windmill, I learned a little more about St Monans Windmill, its background and its connection to the salt production industry. 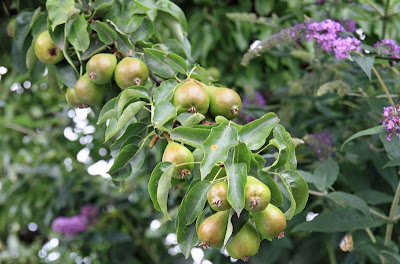 Ah other than potato chips, I did get to see some healthy growing fruit. One of the largest ever pear trees in St Andrews laden, and I mean laden with pears. Sadly they were about a month away from ripening, so no free food or foraging for me.

I also saw these berries in Anstruther. I am convinced that they are wild cherries, in fact I tasted one (don't tell D, he's worried one of these days I'll poison myself) and I'm still here today. It was bitter. What do you think it is? Well even if they were cherries, they were not quite ripe. So another fruit that was not ready for my picking.