So that you don't think I was exaggerating about the blustery winds over the past few days. 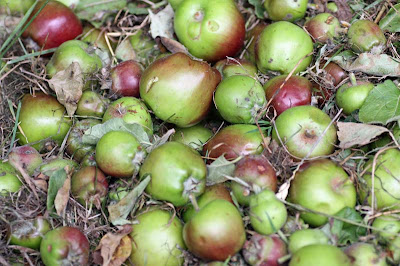 Look at these fallen apples! 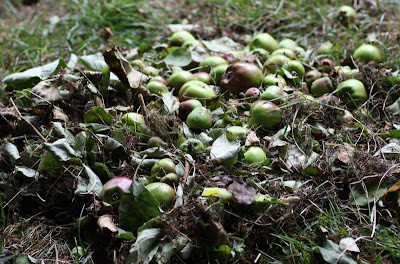 Here they are, raked and all clumped together. These cooking apples albeit small have all fallen off the tree at the bottom of my garden. The apple tree is strategically placed blocking the passing commuter trains. Every year, around autumn time, we had become used to a gentle windfall, so that we could harvest some of the cooking apples. Sometimes there were so many that we were giving them away. But last year for the first time ever, we didn't get to enjoy a single apple from the tree. Not sure exactly what happened. Of course we were disappointed, but we are in a fortunate position as we could purchase some from the grocery stores, but the birds that had become accustomed to making this apple tree a stop came and went. Anyway this year signs were good, that was of course until the wind came and knocked so many of them down. 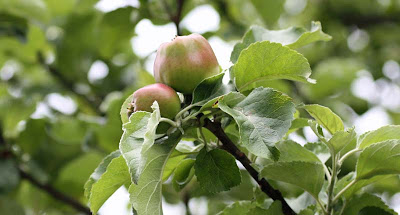 But I look up and still see some there. I may still get to eat home-grown apple crumble, apple ice-cream and hopefully the waxwings will come back too. 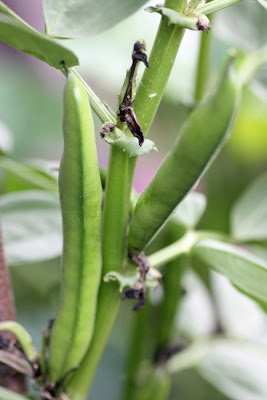 I spy my first broad bean. 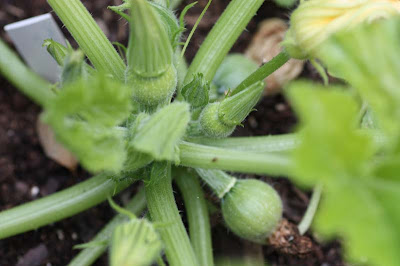 the first courgette di nizza, a round variety, 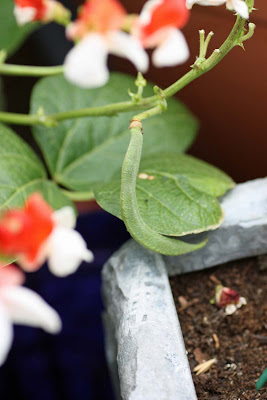 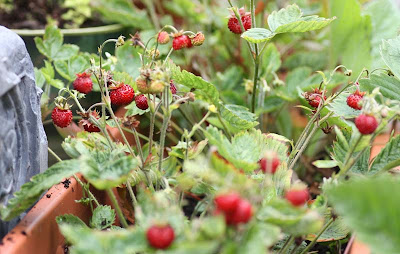 The wild strawberries are growing well. There will never be enough to make a dessert with, but that okay, as I love just picking and popping them into my mouth as I potter around the garden. So much more sweeter than a wine gum (which incidentally I gave up eating many, many years ago because of the animal gelatin content). 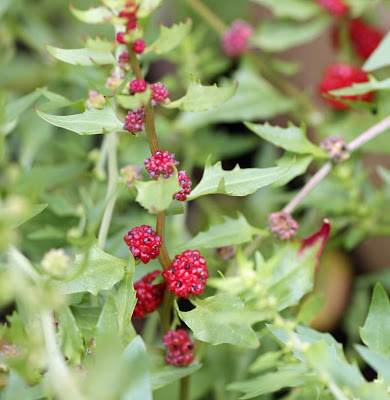 Here's a surprise, finally my strawberry spinach is appearing. The triangular leaves with spiky edges themselves have been poor, but the berries are starting to make an appearance. I don't know why it is called strawberry spinach as the berries to my eyes look more like raspberries or even red bramble berries. Strawberry Spinach botanical name Chenopodium capitatumis. It is also known as strawberry sticks, beetberry, strawberry blite and even miniature dwarf bearded iris . Both the leaves and berries are edible, and can be eaten either raw or cooked. The berries taste nothing like strawberries at all they have a mild flavour similar to the leaf. I am a little disappointed in them, the same way I was disappointed when I grew sweetcorn 'strawberry 'pop' corn' that went all mouldy. 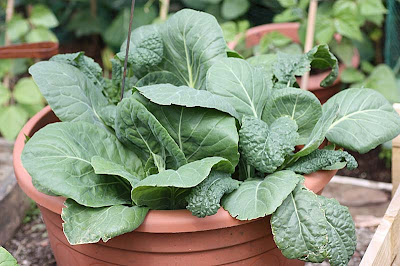 Here is a pot that has a number of Brassicas growing in it such as Tuscan kale and two cabbages. I may have messed up here as they are all fighting for space to stretch. I can only watch now and hope that they give each other space to grow. 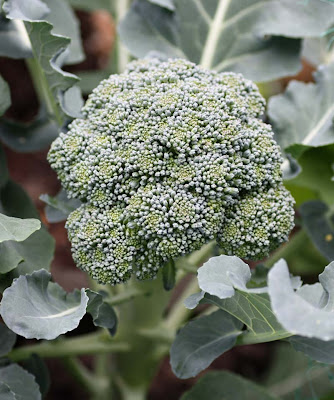 What is growing well in the plot though, are my broccoli. So many of them are shouting to be picked before they flower. 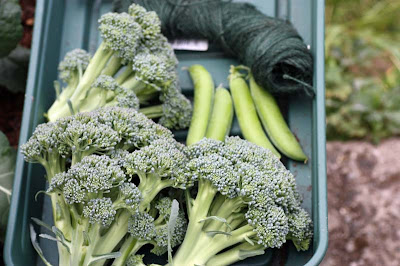 So I did pick a few with some peas. They will be part of our meal this evening. For lunch though, I made this Orzo salad. Orzo is a rice shaped pasta. 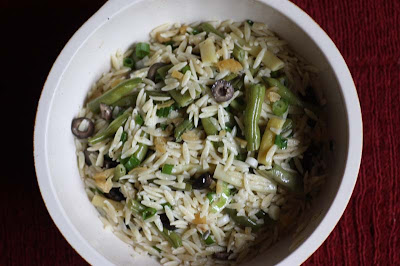 Last month I made orzo salad with courgettes and carrots, but this one is with the green and yellow beans I had found in the freezer last week. 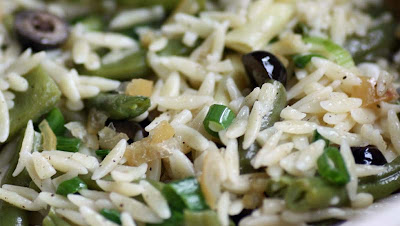 Orzo, green beans, olive and lemon salad
150g - 200g Orzo cooked according to packet instructions, drained and set aside
300g French beans, trimmed
4 spring onions, sliced
8 – 12 black olives, stones and cut into rings
½ preserved lemon, finely chopped (optional)
1 clove of garlic, peeled and crushed
4 tablespoons olive oil
Freshly squeezed lemon juice, to taste
Salt and pepper to taste
Method
Cook the beans in plenty of boiling salted water until just tender. Meanwhile put the onions, olives, preserved lemon, garlic and olive oil into the salad bowl and mix together. Add the orzo to this as well. As soon as the beans are cooked, drain and add them to the salad bowl, swirling them around so they are well-coated with the dressing ingredients. Add the lemon juice, salt and pepper to your liking. Feel free to adjust the flavourings to suit your taste buds. You may want it more zingy. Idea inspired by Catherine Mason’s Vegetable Heaven.