I've had veggie pies on my mind recently. You may wonder Why? Well i've been thinking about the cauliflower growing in my garden and wondering of different recipes to make it interesting for me. It began with thoughts about the cauliflower broccoli pies I made early this year, but instead of the wintry flavours I wanted something that echoed summer.

On my kitchen window sill, I have some basil growing and in the fridge a jar of sun-dried tomato. I boiled some potatoes and mashed them well. Then I steamed the cauliflower until it was tender. When it was cool enough I roughly chopped it. Then combined both the potato mash and cauliflower with a little seasoning. I divided the mix into two bowls, to one I stirred in minced sun dried tomatoes, to the other basil I did this for affect. I thought I'd layer one half of the pie in red and the other in green (see below), but if you decide to make this you can combine it all. I was just being a bit arty, maybe even a bit poncy.

Now for the pastry. I could have taken the easy route as I often do and used puff pastry, but I wanted a change. I then remembered the hot water crust pastry that I've had great success with. Its been a real gift by the veggie domestic goddess.

So these Basil-sun dried tomato cauliflower pies were the final result. Delicately flavoured cauliflower encased in a wholemeal crust pastry. The wholemeal pastry was a little dry so needed something else with it. D suggested eating them with some home-made chutney - good call. 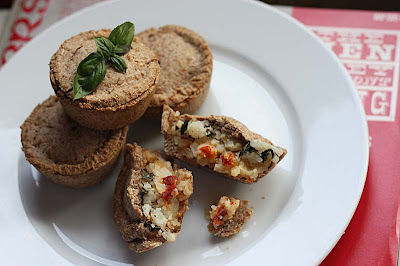 We had four pies left over. D recommended taking them into work the following day for lunch. Although absolutely edible, they were not so nice cold and a little dry, plus it needed to be warm, but that didn’t stop us from eating them. 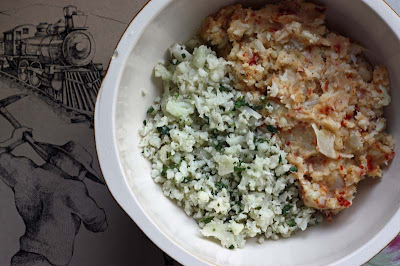 Basil-sun dried tomato flavoured Cauliflower pies
Makes 8
I'm sorry I don't have a written recipe for the filling as I made this on the go with what i had to hand (see above), so hardly measured. Except for the hot water crust pastry. You can find the recipe here. Listen if I can do this, I have no doubt that you can too!