Here are some products I purchased from the Fairtrade event held at the Royal Concert Hall in Glasgow. I decided not to purchase the usual suspects of chocolate and coffee as I get these all the time, so decided to spend my money on these Streetwires key rings: chilli pepper, strawberry and a ladybird - all made in Cape Town, South Africa. But me being me, have decided to use these as Christmas decorations, instead of sticking them with my clunky keys.

Yes, I know Fairtrade products are expensive, but that is the point - its about fair wages. 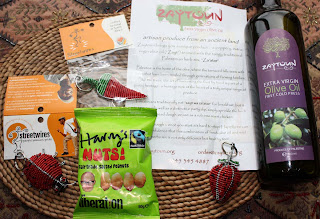 As you would expect there were many stalls there, including a Cooperative called Greencity. I often see their products being sold at Roots and Fruits. I tend to buy in bulk and could easily spend lots of pounds there, so asked the lad could I come along and make some substantial purchases. But the lad at the stall said they only deal with traders. Surely the point is to widen ordinary peoples knowledge of ethically sourced products and encourage them to eat more wholesome and healthy food, it left me feeling that it was not very welcoming to the ordinary person on the street. So what was the point of them being at the Faritrade where the majority of people their are individuals with families who were not permitted to shop at Greencity, should they not be at a Trade Fair?

Something else struck a chord with me as well, the Green Party were there too with a petition questioning whether Glasgow City Council really warranted having its fairtrade status. But more thoughts on that later.

Anyway, after wandering the streets of Sauchiehall, I came home and made a Mexican Themed breakfast which D named Baked Mexican eggs in tortilla cups. Fancy name eh? A friend of mine, who now lives in America made these for me one time. I tried to memorise the ingredients, the sauce is not authentic, it should be chipotle sauce, but I don't have any of that, so I used some red hot sauce I made a few days ago. 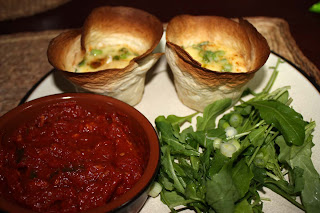 Place the sauce ingredients in a small pot and bring to the boil. Simmer very gently till reduced and thick. Allow to cool.

Heat the oven to gas mark 6. Generously oil 6 of the non-stick muffin tin holes. Use two wedges to line each muffin hold (overlap them so that the pointy end lay on top of the other, flat across the base). Brush the tortilla with olive oil, then spoon in a generous tablespoon of red hot over the bottom of each and crack in an egg. Top with the grated cheese and spring onion, then lightly dust with smoked cayenne. 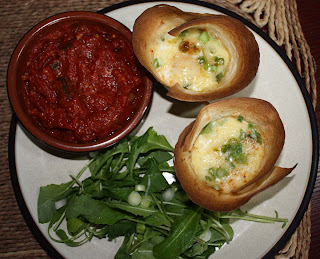 Serve salad and extra red hot sauce on the side.