This coming Sunday, it is St David’s Day (Dewi Sant), the patron Saint of Wales who died on the 1st March 589AD.

As a child growing up in Wales, at school we would make a big deal of St David's Day, by dressing up in Welsh national costume which if you were a girl consisted of a tall black hat, white frilled cap and long dress and participating at the schools Eisteddfod (assembly of competitive singing). 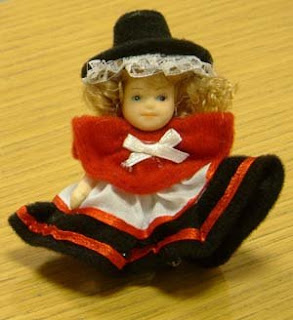 You would see the national flag of Wales, depicting a red Dragon Y Ddraig Goch against a green and white background being flown. Both the daffodil and leeks are regarded as Wales national emblems, but I would only see the daffodil being worn by adults on their outer garments, I rarely saw a person have a leek pinned to their lapel, then or even now.

I know since leaving Wales for University, there has been a major revival in celebrating St David’s Day in Wales, the way the Scots celebrate St Andrews and the Irish, St Patrick, with there now being many more street parades than before. Part I think is to do with the awakening of Welsh national pride, the revival of the Welsh language now being taught at Primary school, and part to do with tourism. For example, in hotels around Wales, you may now be expected to be served with some traditional welsh treats. For breakfast – Laverbread with cockles or a Welsh Rarebit (upmarket cheese on toast); Afternoon tea can be served with Bara Brith (translated speckled bread a traditional welsh fruit bread) or picen ar y maen Welsh cakes which are best served warm, they are meltingly delicious; and the traditional dinner in the evening would be a dish of cawl (lamb broth with leeks), followed by Welsh Lamb. These welsh foodie delights were never part of my childhood, not at home and not at school.

Anyway, now as a Welsh woman living in Scotland, this year on the 1st March I intend to make some Welsh delights with a vegetarian spin at home. I may get lucky and a family member may shlep over some tinned laverbread also known as bara lawr in welsh to me via the post. Laverbread is a cooked puree of seaweed often found on the shores of western Britain. Apparently, the Japanese seaweed known as nori is from the same family. You are very unlikely to purchase Laverbread outside of Wales, unless its from a specialist store or via the Internet. I have had laverbread a few times, it is an acquired taste. If you have ever had the Indian dish saag made with the authentic ingredient mustard leaves, not substituted with spinach, saag is the closest taste of what laverbread reminds me of.

I will have to visit my allotment plot this weekend, to see if some of my daffodils are wide open so that they can adorn my table this Sunday, they did look very promising. I will also pull out some of my dwindling supply of leek crop for a warming starter of leek soup, if no laverbread appears on my kitchen table between now and Saturday.

If you come on over to my blog this Sunday, you may get to see on the menu
Starter: Laverbread rissole or Welsh rarebit
Vegetarian Main: homemade leek soup, followed by Glamorgan Sausages made with Welsh Caerphilly cheese
For dessert: Bara brith and welsh cakes, washed down with something warm inside my welsh mug, with its missing handle

PS You might be interested to note that St David was reputed to have been a vegetarian, mainly living of bread and herbs.

Email ThisBlogThis!Share to TwitterShare to FacebookShare to Pinterest
Labels: Wales