The plan this morning was to go over and spend the afternoon at the allotment, but before that we decided spend the morning with my in-laws at Lochwinnoch RSPB nature reserve which is about 30 minutes from our home, and then take a walk over to Castle Semple, where a farmers market was being held. It was indoors, there were about 9 stalls there including a Meat and Game stall, a fish stall, a cheese stall, a stall selling stuffed olives, peppers and the like, and a vegetarian stall! 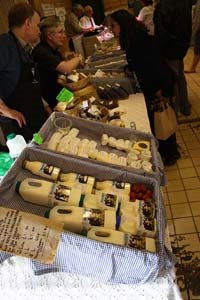 I spoke with the owners of Petrie Fine Foods, Howard and Eileen Wilkinson, an extremely friendly couple who were happy to answer any questions I had about their products. Petrie Fine Foods sells a range of handmade vegetarian and gluten free products: which included spinach and Glazert cheese flan, vegetarian 'haggis' dumpling, vegetarian 'black' pudding and clootie dumpling with whiskey. Howard and Eileen also promote local vegetarian produce, cheese, milk and non-alcoholic berry cordials. I shared with Howard my recent experience and dissapointment in 'farmers markets', especially as a vegetarian. He tried to assure me that things were about to change in the West of Scotland. He informed me that Petrie Fine Foods were also part of the Ayrshire Food Network. Well for me that was quite interesting as I was not aware there was such a food network in the West of Scotland. Howard gave me a leaflet listing the names of the other members, this is something I will have to look into further. 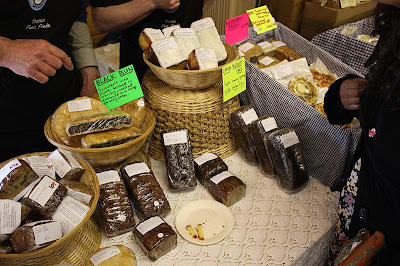 Petrie Find Foods had something called 'Black bun' cake created especially for the Homecoming Scotland. More for me to try the next time I see their stall at a farmers market. New foodie creations do excite me. 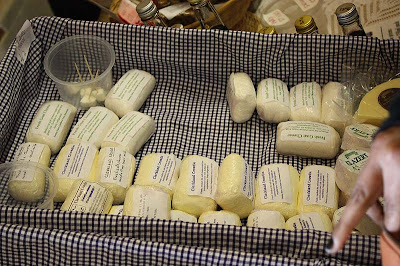 Here are also a selection of vegetarian cheeses, including goats cheese, Glazert and Crowdie cheese which is a Scottish low fat cream cheese with a mild sour taste. I have never tried Crowdie before, and was curious to try some, so I bought a block, which I have yet to try with some Scottish oatcakes which my father in law purchased from the Isle of Arran Cheese shop stall. I also left with a gluten free tomato and basil quiche and a Mediterranean loaf. This was part of our light evening meal when we got back from the allotment. 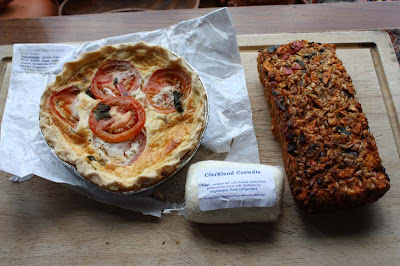 Personally, I would not call this a 'farmers market', but a 'food producers market' as again there was a lack of fresh Scottish vegetables, herbs and fruit, the seasonal rhubarb for instance. The one thing I was expecting to buy and had high hopes for was a punnet of Scottish strawberries, but came back with nout. There was also no bread stall. Still the good thing about today's 'food producers market in Lochwinnoch was it introduced me to some new 'food producers', which filled me with a little optimism.