Stuffed peppers - go on give them a chance

Well I was ever so excited to find some British grown peppers in the Co-op today. I just wish the label had stated what part of Britain. Still it was good to note that these were not imported from overseas.

I don't know about you, but for me the vibrant colours of peppers just shout out summer and Veggie BBQs, but I have never been one to enjoy BBQs, namely because I have always been served tile like veggie burgers with limp lettuce and a tasteless tomato or two. Instead of recreating a veggie BBQ vibe in my garden on this clear blue sky, sunny evening, I decided upon making some stuffed peppers. 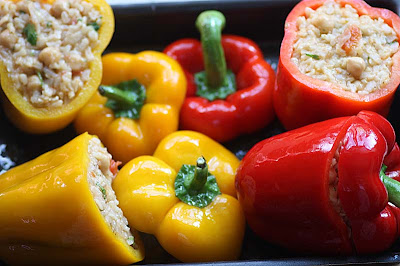 I know, I know - I can just about hear whats going through your head - stuffed peppers! Stuffed peppers not only raise the eyebrows of omnivores who view it as hippy grub, but raise the eyebrows of vegetarians and vegans too as being terribly old fashioned. But today I just don't care. Old fashioned vegetarian dishes such as these when made well can be wonderful and I know this to be the case because I made some few years ago with brown rice and it was Dee-licious. Even my fiancee, now husband who dislikes the thought of brown rice enjoyed every mouthful and was happy for me to recreate the dish. I just could not remember which cookbook the original recipe had come from, but as one with so many cookbooks finding a recipe for stuffed peppers was not that hard at all. 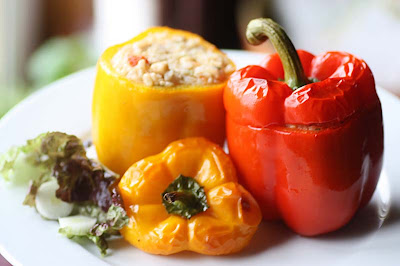 After eating and enjoying my share, I can tell you one thing for sure. I was the stuffed pepper. 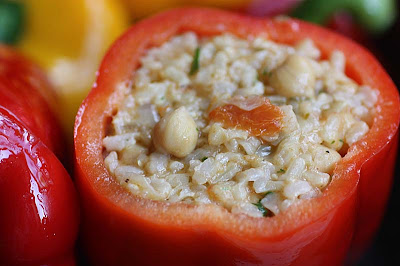 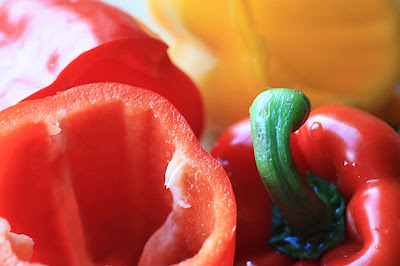 Method
Fry the onion in the oil in a medium heavy-based saucepan, then add the garlic and cook gently until the onion is soft. Add the tomato and rice, cook gently for a few minutes. Add the oregano, stock and salt. Bring to the boil, then cover tightly and leave It cook very gently for45 minutes.
Meanwhile , cut the peppers in half length ways and scoop out the seeds. Rinse and dry on a kitchen paper. Preheat the oven to gas mark 4. Gently fold in the chickpeas, parsley to the rice and season to taste, then spoon in this mixture into the peppers. Stand the peppers in a lightly oiled tray. Bake for 45 minutes, or until the peppers fell tender when pierced with a skewer. Adapted from Rose Elliots Vegetarian Kitchen.