Like the spices sumac and za’atar that have recently begun to appear in the food columns of lifestyle magazines, it was only a matter of time that chermoula would make its appearance too, as either a dressing or a sauce. For those of you who may be unfamiliar with chermoula, Chermoula is a thick, powerful green herby paste. It is often made with a mixture of herbs namely coriander, cumin, lemon juice, olive oil, pickled lemons, garlic and salt. Its roots can be found in North Africa. Chermoula is used as marinade in Algerian, Moroccan and Tunisian cooking to coat either fish or seafood. You will find a number of recipes on the world wide web and cookbooks, but there is no fixed way of making chermoula. Everyone seems to make it according to their palette and each recipe seems to use different spices, but the two main ingredients that are constant are fresh coriander and garlic. 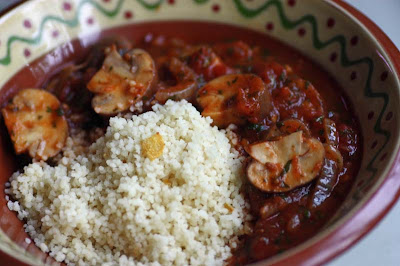 I flew from my parents nest in the mid 1990s for college and then eventually university. Although my mother had successfully instilled every domestic goddess skill there was to learn into me from a very early age, I was never sold on the idea of being 'a good housewife' or even remotely interested in being in the kitchen. In fact, I actively rebelled against these assumed gender roles and subsequently viewed such skills as a chore and a way to keep women in the house.

The only reason I found my way to the kitchen and more importantly the cooker, was the fact that I really missed my mothers cooking, the associated aromas, as well as certain flavours: fresh, herby, spicy, earthy, sour, zingy and so on. Whilst at Uni, I was always hankering for bold flavours to make my tongue feel alive and looking for ways to satisfy this urge and thus my interest in cooking was reignited, first for myself and then for others. It was around this time, that I also discovered the adventurous and experimental cook in me, and the hanging out at cookbook section and shops with vaguely kitchen related things became more than a habit. 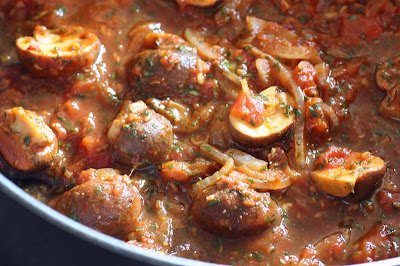 All of this is way of saying how I first came across chermoula. I was introduced to it by Nadine Abensur, not literally of course but via the book Cranks Fast Food. I made it from scratch and served it with oven baked sweet potato chips. Oh my goodness - it was really flavourful – one I recommend especially if you love coriander. Chermoula is so versatile that it can be used to coat vegetables or even grains. This recipe is adapted from the chef Paul Gayler. Here the ‘chermoula’ gives mushrooms a tantalizing aroma as they cook. Now my husband is no fan of couscous, but this is the second couscous dish he has declared 'Delicious'. 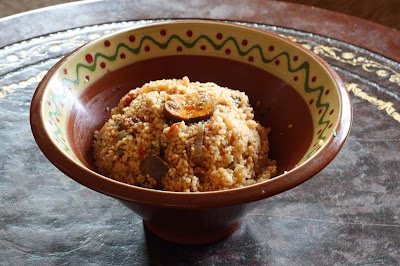 Lemon Couscous and chermoula mushrooms
Serves 4
Ingredients
3 tablespoons vegetable oil
1 onion, finely sliced
2 garlic cloves, crushed
1 teaspoon cumin seeds
1 generous teaspoon dried chilli flakes
200g - 300g chestnut mushrooms, halved
1 tablespoon harissa paste (for a harissa recipe follow this link)
400g can tomatoes, chopped
Small handful of fresh coriander, minced
200g couscous
250ml vegetable stock, boiling
Juice of ½ lemon or to taste
1 tablespoon Lemon pepper (see below for recipe)
Salt and pepper to taste
Method
Place the couscous in a bowl with the vegetable stock and lemon juice, and cover. Leave for 5 minutes until the couscous has swollen. Fluff it up with a fork, cover again and leave for 5 more minutes. Add the lemon pepper, season to taste with salt and pepper and keep warm
Heat the oil in a pan and fry the onion and garlic over medium heat for 5 minutes. Add the cumin and chilli and cook for a few seconds before adding the mushrooms and harissa. Fry for a couple of minutes, then add the tomatoes. Bring to a boil, reduce the heat and simmer for 8 – 10 minutes. Stir in the chopped coriander. Serve with lemon couscous topped with the chermoula mushrooms. 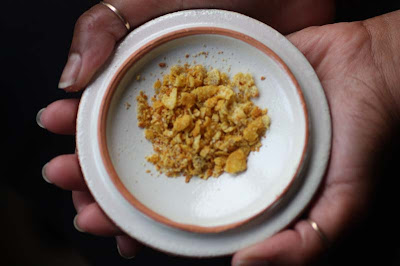 When finely ground (unlike this one), dried lemon zest is a useful ingredient for flavouring grains and perking up other bland food.
Making Lemon pepper
Preheat the oven to gas mark 1. Peel 2 lemons with a potato peeler. 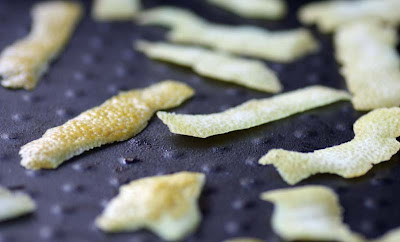 Spread the peel out on a clean baking sheet and bake for 1 hour until the skins are dried and shrivelled. Leave to cool. 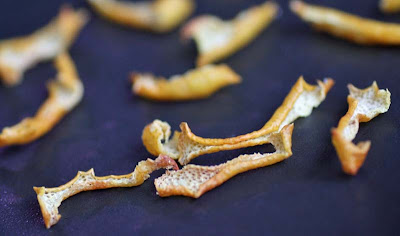 When cool, place the peel in a coffee grinder and grind to a fine powder. Store the lemon pepper in an airtight container for up to 1 month. Slightly adapted from Paul Gaylers Vegetarian Cookbook.