See the previous post for Welsh Cakes and Glamorgan sausages to delight the eye.

I am fortunate to own a smooth griddle. If you don’t have one, a cast iron frying pan will work just as well. You will also need an 8cm crinkled round cutter. Traditionally, welsh cakes are made with lard. This one is vegetarian.

Welsh cakes
Ingredients (makes about 18)
125g cold unsalted butter
250g self-raising flour
75g caster sugar, plus extra for sprinkling
½ teaspoon ground allspice
100g mixed dried fruit raisins and sultanas
1 large egg, beaten
Rub the butter into the flour as if you were making pastry, then stir in the sugar, spice and raisins. Add the egg to make a soft dough. Cover with cling film and leave in fridge for about 20 minutes.

Roll out on to floured surface to a thickness of about ¾ cm and cut out cakes; you will need to re-roll the dough now and again.

Heat your un-oiled griddle or pan and cook the cakes for about 3 minutes each side until golden-brown – be careful not to overdo them. Remove to a large plate and sprinkle with caster sugar.

These are best eaten warm as they will melt in the mouth. 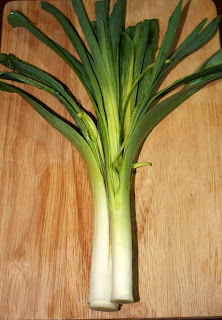 Glamorgan sausages are traditionally made with leek, but as we were having leek mash, I have decided to use onion in its place.

For coating and frying
30g fresh white or brown breadcrumbs
1 large egg white lightly beaten or whisked (optional - I like it whisked as it gives it a tempura like texture).
2 – 4 tablespoons of vegetable oil

Place 150g breadcrumbs in a large mixing bowl along with the onion, cheese and herbs. Then add the mustard powder and seasoning of salt and pepper. Now add the egg yolk and stir to bind together. I tend to use my hands. Then divide the mixture into six equal portions and then using your hands roll each piece into a sausage shape, squeezing gently to hold it together.

Before frying the sausages, gently roll each sausage into the egg white and then into the breadcrumbs, coast evenly.

Too cook the sausages, heat a shallow layer of oil in a large frying pan and fry them, rolling them gently in the hot oil for 7 – 8 minutes till all sides are crisp and golden.

For the leek mash
Make mash as you normally would, and add some leeks that have been softened in either butter or olive oil, then season and mix in the leeks with the mash.