In my student days, I lived for a little while in student accommodation. I shared the flat with three lads, two of whom were Greek (one from Athens and the other Thessaloniki) and the other Irish.

On one of the days, I made some vegetable pakoras containing simple ingredients: thin slices of onion, cubes of potatoes and shredded baby spinach with the obvious spices and gram flour. I made a large tray of pakoras for friends I was expecting over, and then left them in the oven on very low heat. Every time I went to the kitchen and checked the oven, I noticed that the tray of pakoras was slowly shrinking. The culprits were my Greek flat mates, who confessed and declared it one of the most delicious snacks they had ever eaten.

When we parted, one of the Greek lads took the recipe for pakoras from me. I took a recipe for spanakopita from them. A fair exchange I thought. But from the Greek girl downstairs who also came from Thessaloniki I got a recipe for both Moussaka and Spanakopita. 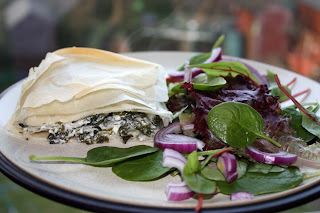 So this is what I made with the perpetual spinach from the garden plot from early this week.