This little Missy has been busy in the kitchen.

Not only have I been making more preserves, I also made some versatile Spinach and lentil soup and lavender bread, but I will share that with you later in the week. Today its another recipe for the jam jars. Whilst peering into my kitchen cupboard, I noted that I had not one, but two jars of stem ginger in syrup. I wondered why on earth would I have two? Then I recalled I was going to make my mother some Rhubarb and Ginger jam. I remember giving my mother a jar from the allotments open day last year and she really loved the flavour. So I wanted to make her some with my own produce, but of course I no longer have my allotment plot and access to rhubarb that was often being given away by fellow plot-holders. The rhubarb I had growing in my own garden plot withered away early this year due to my own neglect. So after that, making this jam for my mother went completely out of my mind. Saying all this, I was still staring at two full jars of stem ginger in syrup and wondering what to do with them?! 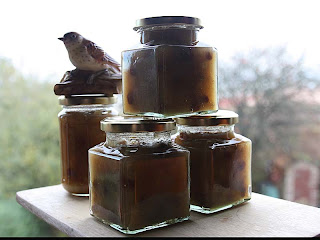 Then I remembered fellow blogger little black fox telling me that she was going to be making either a jam or a chutney with honey and ginger, this prompted me to request her recipe and she was happy to oblige. The recipe is very slightly adapted as I used a whole jar of runny honey and a whole jar of stem ginger in syrup. What was good about this was I was also able to recycle these 2 jars immediately, once sterilized they were re-filled with this very chutney.

This recipe makes a whopping 10 jars. I think I will have to book a space at the local farmers market to off load some of these jars - just kidding - many of these jars will be gifted to unsuspecting family and friends. The flavour of this chutney is unlike the others I've made, it tastes more like a jam - wonderfully sweet, but not too sweet. The ginger hit surprises you when you bite into it, whereas the honey is subtle lurking in the background. The raisins and sultanas give the chutney some depth (or body) as Little Black Fox describes it. Thank you Little Black Fox for being kind to share this recipe with me. 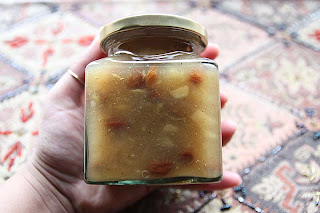 Apple, honey & ginger chutney
Makes about 10 x 245ml jars
Ingredients
2kg apples, peeled, cored & chopped
200g sultanas and raisins
350g stem ginger in syrup, chopped
200g dark or light brown sugar
320g jar of runny honey
600ml cider vinegar (I used white wine vinegar)
1 tsp salt
1 tsp allspice
Method
Little Black Fox instructions were to 'Throw it all in a pan, bring to the boil (inc. liquid from the stem ginger), simmer until thick etc.' I did as she instructed and it was all fine. It took about 45 minutes to reach the chutney consistency. Leave to mature for a couple of months before enjoying.

Please do take time to visit the Little Black Fox blog. Little Black Fox has some very innovative seasonal recipes such as pumpkin dumpling, pumpkin kebabs and some unusual ones such as beetballs (made from beetroot). She also writes with a keen sense of humour.