Or should I call it Rum Pumpkin Puree?! 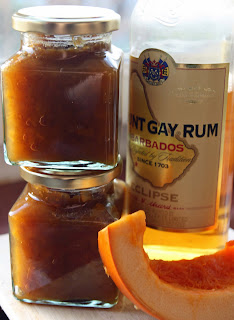 The field pumpkin I used for the Pumpkin, black bean and leek was rather generous in size. I had enough for at least four different meals. But not wanting to bake it or make a pumpkin soup. I decided on making some more preserves, jams and jellies for my store-cupboard. I’ve seen a number of recipes in cookbooks and on fellow bloggers blogs for pumpkin jam and pumpkin marmalade. I settled on one called French Pumpkin Jam purely for its simplicity, making a few minor changes to the original. In my head I thought this pumpkin jam would be similar to the Mulled Carrot Jam. It was not. I was not completely happy with what I had produced. It tastes okay a bit like chunky chestnut puree, but the smell is not particularly alluring. I don’t know if it is the niff of the rum or that I upped the quantity of cinnamon.

Later, when I revisited the recipe, I learned what I had done something wrong. I had thrown all the ingredients into the pan. I was supposed to add the rum in the last two minutes of cooking. Oh well, we all make mistakes in the kitchen. It will not go to waste though, I have some ideas of how to consume it in the next few months or so, and it actually tastes fine, it’s just the alcoholic smell. 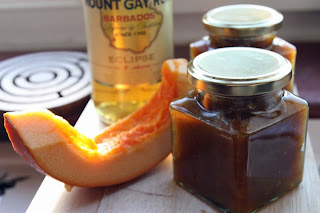 If you want to make this, I'd say have a go. You only need 500g pumpkin, and you can happily omit the alcohol. For a vegan version, I did come across a recipe where you could substitute the honey with dried apricots and raisins.

Rum Pumpkin Jam (or Puree)
Makes 2 x 245g jars
Ingredients
500 g pumpkin, peeled and grated
1/2 - 1 teaspoon cinnamon
200 g granulated sugar
Zest from 1 lemon
100 g honey
2 teaspoons rum
Method
Put all into a preserving pan. Remove the zest from the lemon. In bowl, add cinnamon, granulated sugar, lemon zest, honey. Mix. Cook for about an hour. Stir regularly. Test if the jam has reached it setting point. If the jam gels at once, it is ready, otherwise continue until it is jammy. As soon as the jam is ready, spoon in the rum. Stir and cook over low heat for 2 minutes. Pour the hot jam into sterilized jars. Seal and store.