This Pasta with Fennel and Green Peppers is one I made many years back.  The recipe comes from on of my all-time favourite vegetarian chefs Denis Cotter owner of the best vegetarian restaurant Cafe Paradiso in Ireland, as well as its chef and co-founder.  Denis Cotter was one of the first to deliver contemporary style of vegetarian cuisine. There were not many innovative vegetarian or vegan cookbooks in the mid 1990s found in this part of the English speaking world. I really admire him, unlike other vegetarian and vegan chefs (that came after), he has never ever sought the limelight and has always been humble and modest. never looking for the Michelin Stars or Rosette recognition (although why not, Cafe Paradiso and his team truly deserves that accolade for what its worth). He for me redefined non-meat based cuisine by experimenting with original flavours, brilliant culinary improvisations and modern techniques at the time.  You can see Deni Cotters influences in the way many vegetarian chefs that came after (whether they admit it or not), have been inspired by him or have used many of his recipes as a springboard for their own.  I do sometimes think some people have very short memories as they forget original stars and voices of vegetarian and vegan cuisine in favour of those that crave the limelight and pretend that they have created something original, for example vegetables in cakes, people have you never heard of carrot cake!

His book 'Paradiso Seasons was named as the best vegetarian cookbook in the world at the Gourmand World Cookbook Fair in 2004. Denis Cotter creates restaurant quality food that I truly want to eat. He is a big influence on the way I cook, he is vegetarian icon and a vegetarian hero of mine, especially when I want to create something a bit more avante garde  or honest and down to earth in my own kitchen, but never pretentious. 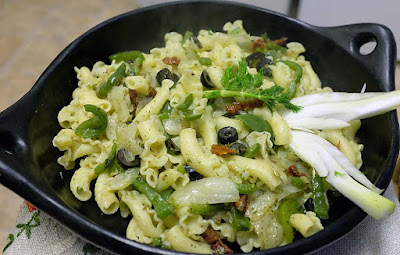 I am patiently waiting for another brilliant and original cookbook from him.  ; and to visit Cafe Paradiso in Cork, Ireland remains on my wish list.  Dear Husband I hope you are reading this, if not I know you already know...


After all that high praise for Denis Cotter, i have to admit for quickness, I have cut lots of corners for this recipe.  For a start, he roasts the garlic in oil until it is tender, soft and sweet and can easily be popped out of its skin.  The garlic enhances fresh parsley and olive oil which forms part of the pasta sauce and much more.

My Pasta with Fennel and Green Peppers is made with Fiorelli from M&S.  Its described as authentic Italian pasta made and air dried in the Italian Alps, using select Italian wheat and a bronze dye for a rough texture that picks up every drop of sauce.  The fiorelli* shaped pasta is supposed to resemble flower buds.  I loved the intense flavour combination in the final dish, lots of layers of flavours, from the garlic, the parsley, the peppers, the fennel and then piquancy from the sun dried tomatoes and black peppers and the pasta acted as a brilliant foil to hold all those flavours.

This is my second  contribution to Food 'N' Flix this month  hosted at All Roads Lead To The Kitchen.  The movie chosen this month was French Kiss with Kevin Kline and the infectious Meg Ryan.

I was fortunate to find the movie on youtube and watched it on a day when I was off work.  Less than 10 minutes into the movie I spotted some fresh vegetables in the kitchen on the table including tomatoes, carrots, fennel and a bowl of mushrooms I think.  This is just before the character Kate receives a phone call from her fiancee Charlie breaking up with her as he has fallen in love with someone he has met in Paris. The feathery fennel inspired me to make this pasta salad.  I am also sharing this Pasta Salad with Soups, Salads and Sammies hosted by Kahakai Kitchen;  and finally  Healthy Vegan Fridays hosted by Rock My Vegan Socks and V Nutrition.

In this blog post called Peeking Through Snowy Windows in 2010,  I wrote about 3 of my favourite chefs celebrating vegetables and Denis Cotter was named then and would still be today.

Italian Fiorelli with Fennel and Green Peppers
Serves 3 - 4
Ingredients
250g Fiorelli Pasta, or other pasta shape.
Cook according to packet instructions, drain and set aside