Over the past few months, I've been eating a lot of vegan dishes and cheese has not been part of my diet much, so  yesterday I had planned to remake my Welsh Goats Cheese Gnocchi, but it quickly turned into a slightly more rich and decadent version.   Read on and you'll see how.

This time the gnocchi  was coated in a copious amounts of creamy cheese sauce, bulked up with sauteed sweet baby Welsh leeks.  And when I say cheese sauce, I mean Welsh cheese.  I could have gone down the obvious Welsh cheese route by choosing Caerfilli/Caerphilly cheese, but I wanted to ring the changes and this time picked up some creamy blue Perl Las whilst in Cardiff city on Saturday.  Perl Las means 'blue pearl' and is made by a family business called Caws Cenarth.  I discovered it only last year upon my return (from Scotland) back to Wales.  It really is unlike any other blue cheese I've tasted. 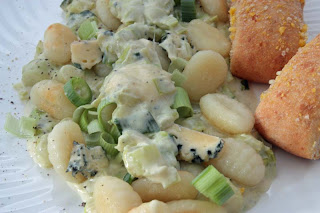 Anyway, the addition of the Perl Las cheese enhances the sauce, in fact, I'd go as far as describing this sauce as uber rich, and that is a word I hardly use in my vocabulary, its so rich, that I'd advise you have some good crusty bread to mop up the thick flavoursome sauce.  Its voluptuous stuff.

You can simply add the gnocchi plain sailing to the Perl Las Leek Cream sauce, but I wanted more textures and something I've been wanting to do a while is pan-fry the gnocchi described as rapid roastini, something I saw in Nigella Lawson's Kitchen cookbook. It worked beautifully, the creamy sauce offset against the crisp exterior of the gnocchi, a bit like a good roast potato! 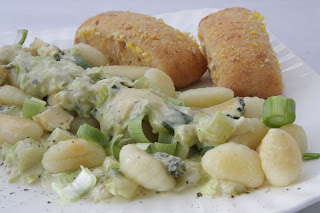 After this mega rich meal, you'll want to have a nap or a good glass of red wine.
I am sharing this recipe with Simply Food who is hosting Lets Cook with Cheese.

Salt and pepper to taste
200g self raising flour, plus extra for rolling and dusting
1 medium egg
Method
Boil the potatoes in salted water until tender. Drain and return tot he pan and shake over a low heat to evaporate excess moisture, season with salt, pepper. Mash well. Transfer to a bowl, add the flour and stir to combine. Beat in the egg, then turn out onto a floured surface. Knead the mixture briefly, then divide into 4. Roll out each piece with your hand into a 1 inch cylinder. Cut into 1 inch dumplings. Chill in the fridge until ready to cook. When ready to cook, drop the dumplings into boiling salted water. When they rise to the surface, they are cooked and ready to serve.
or buy 500g ready made if you want this to be a quick after work meal.
Cook according to packet instructions.
Optional *Pan fry in a little olive oil until crisp and golden brown on both sides.
Ingredients for the Sauce
60g full fat butter

Add oil and butter in a wide pan, until it melts then add in the leeks and sauté until soft and tender, then stir in the cream and turn the heat low and bring to a gentle simmer.  Stir in the cheese and allow to melt.  Season to taste. When you are ready to serve, stir in the gnocchi and allow to heat through.  Taste and tweak seasoning and serve immediately. 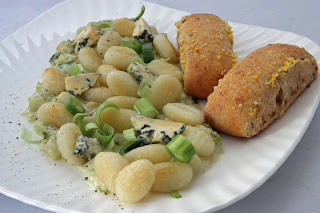