Its been a little while since I have made stew with fluffy herby dumplings.  And the atrocious weather on Sunday kept me indoors and in the kitchen, cooking up some advanced meals for the working week ahead, this Butternut Squash, Kale and Sweetcorn Stew was one of them.  I think stews, casserole and ragout type dishes are best made a day or two in advance for the flavours to embrace the chosen vegetables.

So when I got in from work, all I had to do was put the stew on the hob to start warming through and as it does, begin making the dumplings  which only takes moments to whip up - really - dropping the uneven shaped balls on top. Put the lid back on and allowing the vegetable suet to do its magic, fluff up and almost double in size in the steamy bubbling heat.   I have written about suet before, click here if you want to learn more. 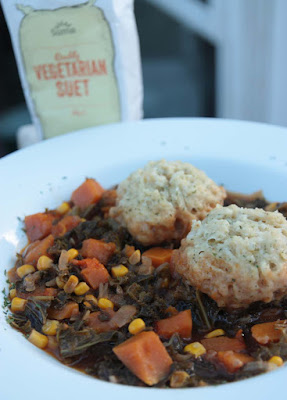 The dumplings could be kept plain or just with herbs, but I wanted a little cheesyness without the greasy weight and that came in the form of nutritional yeast fondly known as nooch by many vegans, but those of you who are not vegan are most welcome to put a tablespoon or two grating of cheddar cheese. 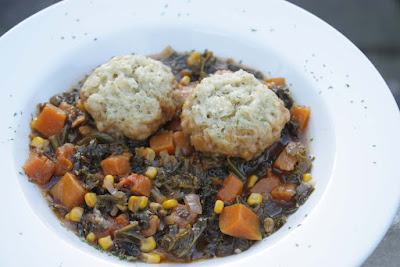 The stew was so rich and almost meaty in flavour from the yeast extract.  The vegetables not only added colour and texture, but also a sweetness and a certain earthy flavour. 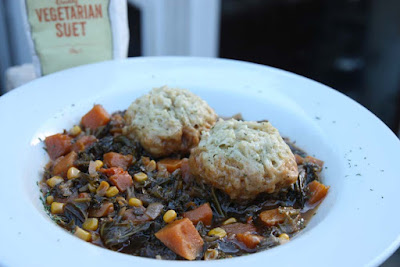 I am sharing this with The VegHog who is hosting #EatYourGreens this month.

Serves 4
For the Stew
Ingredients
1 large onion, peeled and finely sliced
2 tablespoon olive oil
2 – 4 cloves of garlic, crushed
1/2 Butternut Squash, peeled and chopped into small bite size cubes
250g Curly Kale, removed from the stalk and roughly shredded
900ml vegetable stock
1 tablespoon Marmite or alternative yeast extract
1 tablespoon sun dried tomato paste
Salt and pepper to taste
Sweetcorn, fresh, frozen or canned
Method
In a large saucepan, heat the olive oil and add the onions and garlic and cook until soft. Add all the chopped vegetables and stir fry for a few minutes until the vegetables are beginning to look translucent around the edges. Then pour in the vegetable stock, tomato paste and yeast and bring to the boil, turn down the heat and simmer with the lid on for 20 minutes or until the vegetables are tender.
Season to taste.
Whilst the stew is simmering, make the dumplings.

When you are ready to throw the dumpling in, make sure you stir in the sweetcorn!
Herb Nooch Dumpling
Makes 8
110g self raising flour
50g vegetable suet
1 teaspoon dried herbs, preferably parsley
1 tablespoon nutritional yeast
Salt and pepper to taste
Method
Put all the ingredients into a bowl and give it a good stir to combine, then slowly pour in a tablespoon of cold water at a time until it begins come together, be careful not too much water - just enough to combine to make into balls
Divide into 8 balls, they will see small, but they do puff up.
Drop gently into the simmering stew.
Put lid on and simmer for 15 - 20 minutes until puffy.
Serve immediately.