Whilst in Essex, we took full advantage of the dry weather and explored as many scenic places as we could. Leigh-on-sea was one of them. 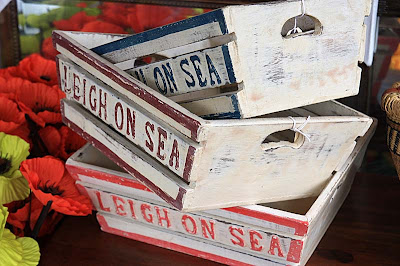 Not an English song, I know, but undeniably Old Leigh has Irish links. 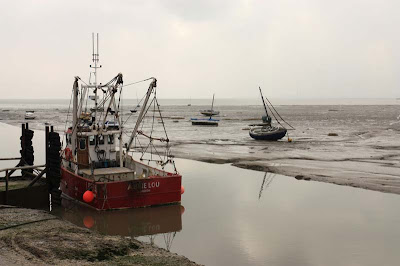 Every year, Leigh-on-Sea celebrates Leigh’s fishing industry and heritage, but today it was very quiet. Other than the odd fishing boat here and there, it was relatively quiet and cold. We decided not walk on the gravelly beach, as it was rather muddy and I didn't want to get my shoes mucky. So we decided to head back and walk the streets of Leigh instead. Just look at these charity finds. 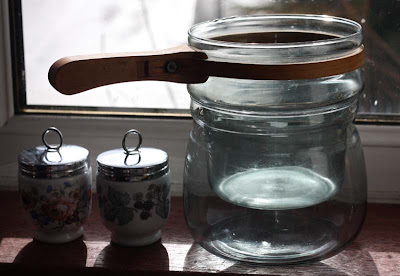 I purchased a Pyrex double boiler. I was surprised first to see a double boiler made out of glass, secondly the wooden handles. When I got back home, I looked on the Internet and could not find a similar one. So you can imagine how chuffed I was at my find and at a bargain price of £2.95.

My dear blogger friend Brenda fondly known as GardeningBren in Nova Scotia sent me an etsy link to a very similar looking Wooden handled Pyrex Double Boiler. If you follow the link, you will note that it has a lid. I knew the lid was missing from the one I purchased and wasn't so bothered by it, but I had not noted that the wooden handle was missing from the bottom one. I'm still rather pleased with it and will be extremely careful when I use it. I've just learned the reason behind why the handles were made from wood. Wood was used because the metal had to go to the war effort. This boiler was produced in 1941. There are also numbers and green markings at the bottom of each. 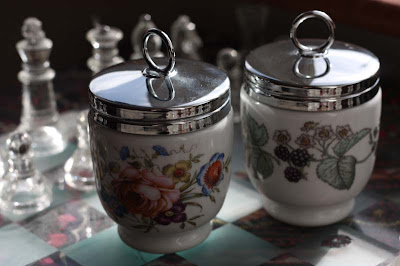 I also purchased two Royal Worcester porcelain egg coddlers with an easy screw top lid. Royal Worcester is Britain's oldest manufacturer of porcelain, and it was here, over a century ago, that the English tradition of Egg Coddlers began. The patterns on these two are called 'Bournemouth' and Lavinia'. Well how could I resist at a bargain price of £4.50 for the two of them.