aka the 'Winter wrap'.

You know for winter greens, this was a very tasty tortilla wrap and a well deserved snack after a hard days graft in the garden. 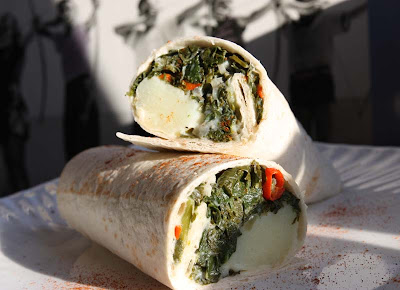 I've been hankering for a reason to make Post Punk Kitchens (PPK) 'Potato and Kale enchiladas' which I found truly exceptional on its own, but even more delicious when drenched in 'Roasted Chile sauce'. However, when I saw this recipe for 'Winter Wraps' in Thomasina Miers cookbook 'Mexican Food Made Easy', I was more than happy to change my mind as I really like Thomasina Miers approach to cooking. The texture of the filling, namely the curly kale was substantial with real bite, what I'd describe as chewy 'green meat'. The main difference with this version was its flavour. PPKs Potato and kale enchiladas have warming spices like cumin, whereas this one has a citric undertones. Still very good, just different. The recipe recommends using a combination of winter greens, curly kale, spinach and chard. For my recipe, I just used curly kale and spinach. Delightful. 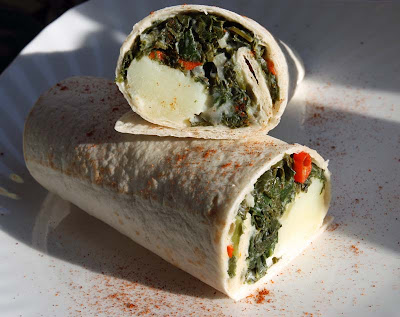 Kale and Potato Tortilla wraps
Serves 4 - 6 people
Ingredients
450g- 500g winter greens and curly kale, washed and sliced
400g potatoes, cut into small cubes
2 tablespoons olive oil
2 shallots, finely sliced
2 red chilies, sliced
2 – 3 cloves garlic, minced
1 tablespoon white wine vinegar
Optional 200ml creme fraiche
Salt and pepper to taste
Method
Put a large pan of water on to boil and season with salt. When it is boiling, add the greens and blanch for 5 minutes or so until the leaves have softened. Remove the leaves with a slotted spoon and now add the potatoes to the boiling water. Cook the potatoes until they are soft. Drain and set aside. 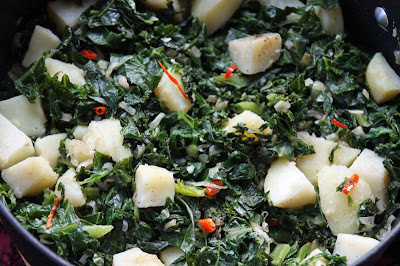 Meanwhile, heat the olive oil in a wide frying pan and cook the shallot, garlic and chilli over a medium heat until they have softened. Add the greens and continue to cook for 5 minutes. Then stir in the potatoes, vinegar and season to taste and cook for a few minutes. Optional: If using creme fraiche, add to the pan and bring up to a simmer and cook gently for a few minutes so that the cream can reduce. 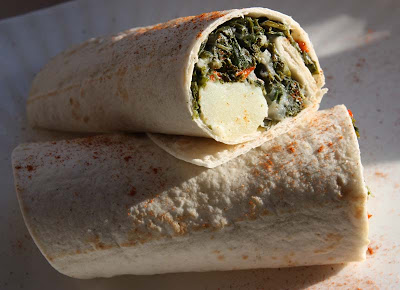 Fill your tortilla wraps generously with the filling, then roll and put in a moderately hot oven for about five minutes to heat up. Slice in half and serve immediately. These are okay to eat cold too, but I preferred them warm. Adapted from Thomasina Miers Mexican Food Made Easy.