Celeriac and Coriander Soup with a dash of lime

So here is a bonus recipe for the day: Celeriac and coriander soup.

I had some celeriac left over from the Celeriac and Brown rice Gratin I made earlier. Again, not one to waste I made a soup . I liked the soup, so did D saying it was 'rich, creamy and flavourful', but he did have a little criticism. As much as he likes citrus and sharp flavours, he thought I was a little too generous with the lime juice towards the end. I also added coriander to the soup, only because I had some in the fridge but if your not keen on coriander, you could easily substitute this with parsley or omit it all together. 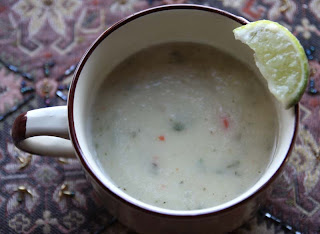 Celeriac and Coriander Soup with a dash of lime
Serves 4
Ingredients
2 tablespoons olive oil
1 medium celeriac, peeled and roughly chopped
1 ½ pints vegetable stock
Juice of 1 lime
1 inch knob of ginger, grated
½ teaspoon dried thyme
1 red chilli, chopped
Small bunch of fresh coriander, leaves and stalks separated
Optional: 50g creamed coconut
Salt to taste
Method
Heat the oil and cook the celeriac gently in a saucepan for 10 minutes, without colouring. Add the stock, ginger, thyme, chilli, coriander stems and half of the juice from the lime. Bring to the boil and simmer covered for 30 minutes until the vegetables are tender. Remove from the heat and add the creamed coconut. 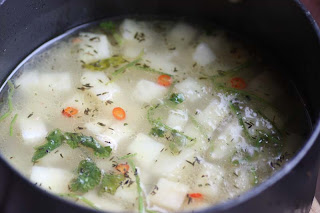 Cool a little, then puree in a liquidiser until smooth. Taste for seasoning. Reheat gently, stir in the remaining lime juice to taste and the coriander leaves and serve. Adapted from Covent Garden Soups.