When I picked up a celeriac, also known as Celery root from the supermarket, I had intentions of making Celeriac and Horseradish burgers, but on having made the Harissa Bean burgers recently, I changed my mind to something a little more homely. Another reason for making this is to use up store cupboard ingredients, in this case 'brown rice'.
I've made this 'Brown rice gratin' before with homegrown baby sweet lightning pumpkins.  Here it is made with celeriac and carrots.  Although not shown here, the gratin was covered generously in cheese sauce, but I don't think its necessary as it also good without.

Oh just a word of caution, go easy on the seasoning, I found that after I had seasoned the brown rice, seasoned the roast vegetables, and seasoned the cheese sauce and it was all a little too salty for me, but other other that it was good. 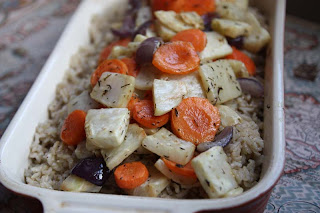 Celeriac and Brown Rice Gratin
Serves 4
Ingredients
For the rice
210g brown Basmati rice
1 tablespoon olive oil
4 shallots, peeled and sliced
1 pint vegetable stock
For the vegetables
1 medium celeriac, peeled and cubed
200g carrots, peeled and sliced
2 medium red onions, peeled and quartered
1 heaped teaspoon dried thyme
2 cloves garlic, peeled and crushed
2 tablespoons olive oil
salt and black pepper to taste
For the cheese sauce
1 pint milk
40 g plain flour
40 g butter
1 teaspoon cayenne
75g Cheddar, grated
Salt and black pepper
Method
Preheat the oven to gas mark 8.
Place the vegetables and the red onion,garlic and herbs,season with salt and pepper. Toss them in olive oil. Evenly arrange them on the baking tray, then place this on the highest shelf of the oven to roast for about 30 minutes, or until they are nicely brown at the edges. As soon as they are ready, take them out and reduce the oven temperature to gas mark 6.
For the rice
Begin by warming the frying pan over a medium heat, then add the oil and the onions and let them cook for 3-4 minutes. Next stir in the rice and turn the grains over in the pan so they become lightly coated with oil. Then add the boiling stock, along with the salt, stir once only, then cover with the lid, turn the heat to the very lowest setting and cook for 40-45 minutes. Please don't remove the lid and don't stir the rice during cooking. 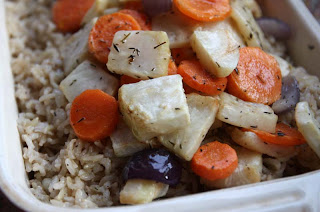 Meanwhile, make the cheese sauce by placing the milk, flour, butter and a pinch of the cayenne pepper into a medium-sized saucepan, then whisk it all together over a gentle heat until you have a smooth, glossy sauce. Let it cook on the lowest heat for 5 minutes, and after that add half the cheeses. Whisk again and allow them to melt into it, then season the sauce with salt and, black pepper. When the vegetables and rice are cooked, arrange the rice in the ovenproof dish, then the vegetables on top of that, followed by the sauce, pouring it over and around the vegetables as evenly as possible. 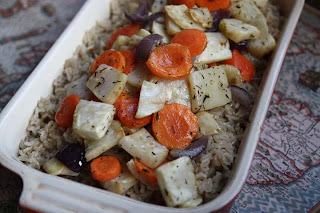 Finally, scatter over the remaining cheeses with a sprinkling of cayenne pepper, then return the dish to the oven and give it about 20 minutes or until the sauce is browned and bubbling. Adapted from Delia's Vegetarian Collection.