I've made my first batch of crumpets ever and I was most pleased with the results. I'm finding it hard to describe the Crumpet. Its a doughy, round and yeasty pancake; or soft spongy cake. Crumpets are traditionally cooked on a flat top griddle. The creamy batter is gently ladled into ring moulds, and whilst being slowly cooked the crumpets develop its distinct porous texture. For me watching these tiny bubbles appear and burst was quite amazing to witness. 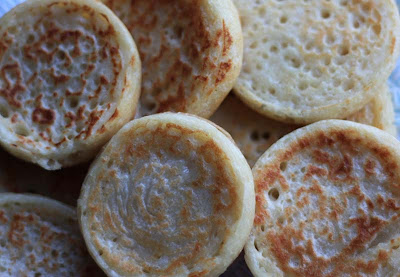 My mother has a fondness for crumpets. When I was a child, I remember her always bringing some home with her from her supermarket shop. I never quite understood her liking for them, as I found them bland, stodgy, bouncy and spongy. My mother would simply toast them under the griddle, spread them with a little butter and enjoy. I think I may have appreciated them more had they been pasted with something a little more exciting than just butter. Perhaps some berry jam, peanut butter, golden syrup, honey, even chocolate. Just imagine that melted chocolate being sucked up into those yeasty nooks and crannies. Well, I may not have had an appreciation for the crumpet then, but now I do. Forget about butter, chocolate and jam though. I enjoyed some this morning with Melon Chilli Jelly - how posh am I?! Well I have to start making a dent in all those homemade preserves, jams and jellies. 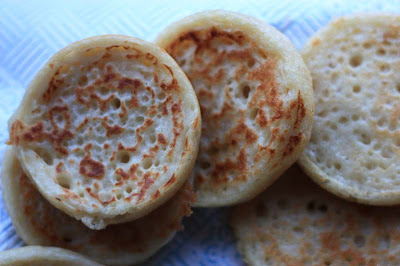 Oh I don't want to mislead you, these crumpets do take a little while to make. First the batter, which you will have to rest for a few hours or so, and then the making/cooking of them is a slow, but rather calming process. I was in the kitchen a good hour, but I had nowhere to rush. Homemade Crumpets Makes 12 Ingredients 450g plain white flour 350ml warm milk 350ml warm water 5g powdered dried yeast 10g salt 1 tsp baking powder A little sunflower or vegetable oil Method In a bowl, whisk the flour, milk, water and yeast into a rather runny batter the consistency of single cream. Cover with cling-film and leave for an hour until really bubbly (or three to four hours, if need be). Heat a heavy-based frying pan or flat griddle over a medium-high heat. Whisk the salt and baking powder into the batter. Lightly grease the crumpet rings and pan. Put one ring in the pan, fill to just below the top – the batter should stay in the ring and lots of holes should appear on the surface after a minute or two. (According to Hugh, if it dribbles out underneath, it is too thin, so whisk a little more flour into your batter mix. If lots of holes don't form, it's too thick, so whisk in some water.) Assuming your test crumpet is OK, after five minutes or so, when the surface is just set, flip it over, ring and all. (If the cooked base seems too dark, turn down the heat.) Cook for two to three minutes, until golden on the other side. Repeat with the remaining batter in batches. Butter and eat at once, or cool on a wire rack for toasting later. Original recipe from the Guardian. For a vegan version of crumpets, please check out Emma's adaptation on her blog Vegan Food for the Hungry Student.

Email ThisBlogThis!Share to TwitterShare to FacebookShare to Pinterest
Labels: bread