I have been wanting to make a pumpkin chutney since I tasted some on an oat biscuit last year at some food event. Most of the pumpkin chutney recipes however are a bit plain for me. I wanted one that had a little bit of warmth. Whilst flicking through my cookbooks for inspiration, I came across one from the Women’s Institute. It is such a slender and skinny booklet that you’d miss it amongst the other chubbier books. I found a pumpkin chutney recipe in there with flavours that appealed. So that is what, I made with a few little tweaks of my own of course.

I am so sorry that I did not get a photograph of the ingredients raw in the pot, as the colours were just beautiful. The gold from the pumpkin nuggets, the alluring bright red from the chilli, ruby jewelled red from the cranberries, tart apple pieces offset jet studs of raisins and sultanas. Once cooked down the colours in the jar just echoed of Autumnal leaves drifting in the breeze.

Whilst cooking, I tasted the chutney for flavour as I went along. But I want to get D’s opinion about the spices too, especially the kick of the chilli. I had decision to make, whether to keep the red chilli pods whole or mince them in. I called him into the kitchen. As he walked in, I saw the expression on his face change as he was hit by the acidic smell of the bubbling vinegar. On tasting a teaspoon, he said the flavours were 'spot on' and left me again. 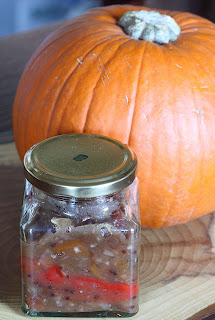 An hour later, after having just filled the jars and screwing the on the lids, D comes back into the kitchen, peering into the empty pot ‘Are there no leftovers? I fancy eating some chutney and cheese’. This pumpkin chutney has to mature for two months before consuming. I pointed him in the direction of the fridge and reminded him that we still have some tomato and celery chutney from last year, and if he did not want that, there was also some unopened spiced plum chutney in the cupboard. 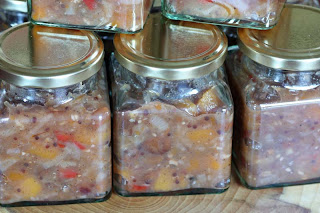 Alternative: if you don’t want the chilli heat, you can omit both the chillies and the mustard seeds. The chutney will still be excellent.
Red Chilli Pumpkin chutney
Makes 8 x 245ml jars
Ingredients
680g prepared pumpkin, peeled, de-seeded and cut into small chunks.
450g cooking apples, peeled, cored and roughly chopped
2 large onions, chopped
100g dried cranberry
75g raisins and sultanas
2 teaspoons salt
60g fresh root ginger, shredded finely
½ teaspoon ground black pepper
2 teaspoons ground allspice
2 tablespoons black, brown or yellow mustard seeds
4 – 5 fresh fat red chillies, pierced
6 garlic cloves, crushed
1 pint malt vinegar
450g granulated sugar
Method
Put all ingredients, except the sugar in a large pan and mix well. Bring to the boil and then reduce the heat and simmer for about 45 minutes, stirring occasionally, until the contents are very soft. Optional: either leave whole or take out the whole chillies and mince. Then return to pan with the sugar until dissolved. Continue to simmer, uncovered for about 1 – 1 ½ hours or until the chutney is very thick and there is no liquid left on the surface. Spoon into sterilized jars and seal. Store for 2 months before use. Adapted from the Best kept secrets from the Women’s Institute Jams, Pickles and Chutney's by Midge Thomas.