This bowl of cooked grains does look a little beige, bland and boring. I’d like to say don’t judge it by the way it looks as it tastes much better than it looks, but I cannot - I can't get that excited about it and can only say for me it was just okay.

The texture of the buckwheat for me was a cross between barley and brown rice. The flavour could be described as a nutty. I think this dish woudl be good to eat as a cold salad. Well it was, as I actually got to take the leftovers in to work as a healthy salad. 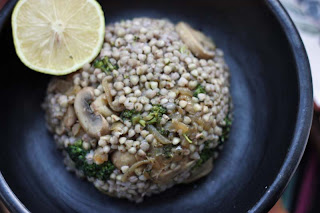 This does not mean I won’t try buckwheat again. Of course I will, it just means I’ll have to try some other buckwheat recipes. I’m sure I’ll eventually find one I rather like and then you won’t stop hearing me raving about it.

The author Mollie Katzen calls this dish as ‘Broccoli and Buckwheat Godunov’. I was not familiar with it and assumed Godunov was a classic Russian dish. It was only upon researching I noted there was no such dish of this name. I think for some reason Mollie may have just named it in honour of the Russian Czar Boris Godunav, but I don’t know for certain, maybe someone can shed more light. 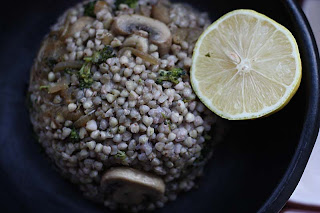 The recipe advises topping the dish with hard boiled egg, but for some reason D does not like this idea of grated hard boiled eggs, so this was omitted.
Broccoli and Buckwheat
Serves 4
Ingredients
325ml water
200g buckwheat
1 tablespoon olive oil
1 medium onion, finely sliced
½ teaspoon salt
200g button or chestnut mushrooms, sliced
250g broccoli, florets cut into half
1 tablespoon dried chervil
Lemon juice to taste
Method
Place the water in a medium saucepan and bring to a boil Add in the buckwheat, lower the heat to a simmer and cook for 8 – 10 minutes, then remove from the heat and let it stand for a few minutes.
Heat the oil in a large pan, add onion and salt and sauté over medium heat until the onion begins to soften. Add the broccoli and cook for 5 minutes, then stir in the mushrooms and chervil. Cover and cook for another 5 minutes or until the broccoli is tender. Stir in the fluffed up buckwheat, along with the lemon juice. Stir until well combined. Season with freshly ground pepper and salt to taste. Adapted from The New Enchanted Broccoli Forest.