I don't like talking about my work on my blog, as I like to completely switch off from it when I get home. But recently that has not been easy to do. I've been coming home most evenings feeling rather disheartened and its a hard feeling to shrug. A number of my work colleagues are being given (voluntary) redundancy. Many of them are of a certain age, so some are happy with early retirement, but others like myself who have only just started our professional careers, not so. Some of you may remember a few months mentioning my increased workload which extended now to covering wider Scotland. I was making the most of additional responsibilities by enjoying the new places, but deep down I had hoped that something positive would come from it. Now a few more months on, I have a gut feeling my own role is no longer secure. Every day I walk in waiting, waiting for my manager to say something. Well today, he approached me and confirmed that unfortunately a 'letter will be coming in the post…' I have never been in such a position before. The work I do is very specialised and there appears to be no upward or side way opportunities for me within this organisation. As the breadwinner in our household, I seriously need to think about other career opportunities, which may mean moving. But looking for another job and moving, well you all know, its not the best time to be doing either of these. So the prospect of being unemployed in between may just become a reality. I’ve only ever been unemployed once in my life. It was for one week and I absolutely hated it. I’m trying to remain upbeat, but its not easy. I’m just waiting on this letter to come now and see what the options are for me.

Well whatever happens, one thing for sure, I won’t be going hungry for a long while, my larder is stacked with a lot of preserves, jams and chutneys. 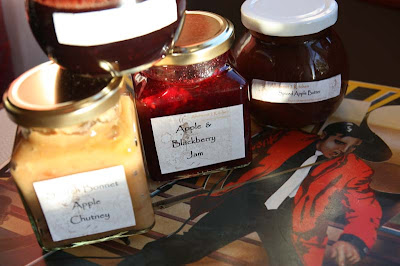 As well as dried beans, pulses, grains and tins. Talking of tins, my kitchen cupboards would not be without a few tins of tomatoes to keep them full. I know I don’t need to convince you all when I say they come in handy for many dishes from the base for a stew, ragout, casserole and soup. 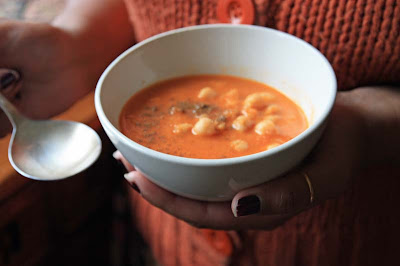 Ideally, I would love to have used fresh tomatoes in this soup, but I did not to get to grow any as I did last year, so it was down to the trusty tinned tomatoes.
Updated: November 2010
In short, I have been given one weeks notice by my employers that my role will no longer be part of the organisational structure; and that there are presently no alternative roles for me within the organisation.  I was being heavily utilised by the HR Team, namely the newly appointed HR manager - carrying out work for them throughout Scotland, even though I was just employed for the West of Scotland. I had wondered if there was any opportunity for me in the HR Team.  But the recently appointed HR Manager had taken a dislike to me for whatever reason.  I think it is because I like many others know from experience that she rides on the successes of others people accomplishments; and doesn't do much work herself, except for delegating her work to others including me.  For example, I was sent to offices in offices outwith my remit such as like Kirriemuir, Musselburgh, Linlithgow and Aberdeen because she was too cowardly to confront challenging staff.  Truth is she has been given this rather senior role because of her 'close connections' with a senior manager, nothing to do with merit, talent or skills and everyone here knows this, even my line manager.  I remember once someone in the management team once described her as horrid.  I now know why.  I know the real reason there are no opportunities for me in Scotland in HR department are because of this woman, but they say simply that the role is no longer required.  I am not stupid.  I am angry.  I know the truth that some people in positions of power abuse that position and manipulate and treat people like puppets.  The more I am standing up for myself, the more I am being bullied and harassed by her team, not her directly (that is manipulation of power).  Sadly my original manager has very little to do with me now.  I have been abandoned.  The union shows me very little support too- as it was with their agreement that my role was removed.  I know my days as a token Black Asian female manager with the organisation are limited now. Question is do I jump, before being pushed?! Well it won't be without a fight of sorts. 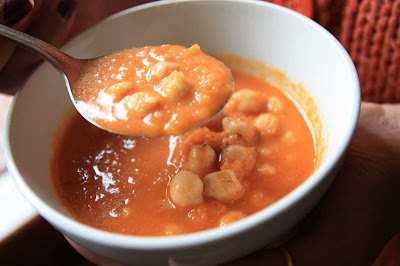 Curried Tomato and chickpea soup
Serves 4 generously
Ingredients
1 medium onion, finely sliced
1 tablespoon vegetable oil
1 tablespoon grated ginger
2 – 3 cloves garlic, minced
1 tablespoon curry powder
Salt to taste
Pinch of chilli (optional)
1 x 400g can of chopped tomatoes
1 x 400g can of cooked chickpeas, drained
3 cups water
Method
In a wide pan, cook the onions and garlic in the oil until the begin to soften. Add the ginger, curry powder, chilli if using and salt and sauté for a minute or so, stirring constantly so the spices don’t burn. Add the tomatoes and cook for a few more minutes, before adding the water, cover and bring to a boil. When the water boils, reduce the heat and cover and simmer for 15 minutes. Then add in the chickpeas and simmer for 5 minutes. Then remove from the heat. Puree some of the soup in a blender and stir it back into the pot. Reheat, and then serve in bowl.