This morning we went to Pollock Park Country Park. We've been there many times, but today was for a different reason. 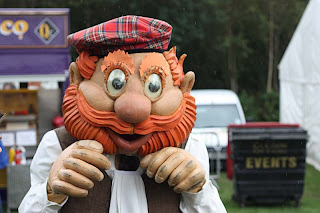 It was a good to get out of the flat. The way I'm feeling, I could easily have stayed in bed all morning. 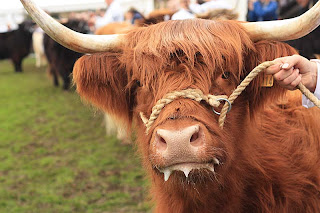 The fresh air was good, until you got up close to the cattle - who were chucking it, to interpret 'stinking the park', but you have to expect this. Imagine a number of people being stuck in a life, and their bodily smells, I know which I'd rather choose. 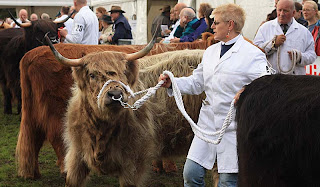 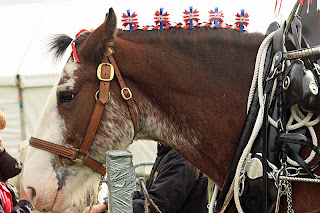 Love the hairdo of this Clydesdale horse. 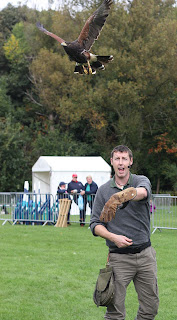 I thoroughly enjoyed the birds of prey demonstration by Cumbernauld Wings of Prey and the ranger was extremely informative. I learned more about owls today, than I did at wildlife classes at school. For example, have you heard of the saying wise owl, not so. In the photograph above swooping is a Harris Hawk. We were only at the park for about an hour as the rain came down heavy and chased us back home. Oh I'm fibbing it was not the rain that chased us home. We've have been living in Scotland for over 10 years now; and me coming from Wales where it rains all the time, were both pretty used to getting a good soaking. It was the fact that D forgot to put his raincoat in the car. 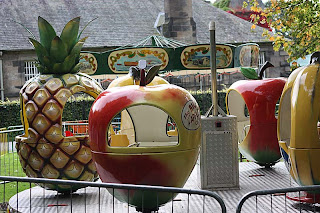 Dancing fruit - no its really a whirling waltzer!

Email ThisBlogThis!Share to TwitterShare to FacebookShare to Pinterest
Labels: events, Parts of Scotland