In late 2006, I was given my first ever allotment Plot. I was ever so excited. 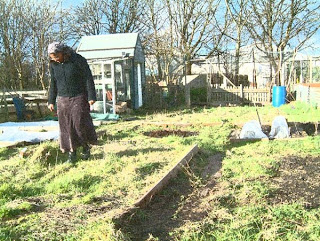 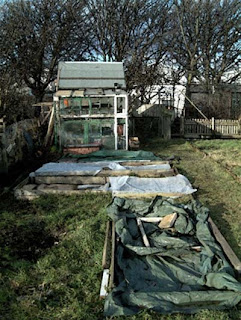 It had its own shed and quirky greenhouse made from recycled windows, some raspberry canes, strawberry plants and rhubarb crowns. 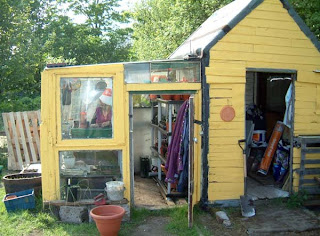 However, there was much work to be done. With Ds support and labour, and the help of a couple of friends along the way, we managed to get it up to a respectable, if not very good standard. 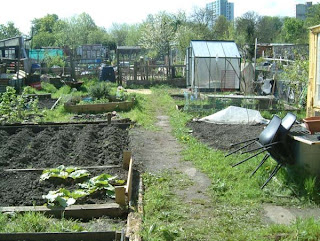 We lugged concrete slabs, bricks and heavy recycled wood and much more from which we built raised beds from recycled wood, a compost bin and a herb box, a base for the greenhouse and bricks for the make shift cold frame. We painted the shed and greenhouse vibrant yellow, and even built bird boxes and a wildlife pond. So much labour, sweat and love went into the beautifying of plot 11. It was also very productive - rewarding us with lots of fruit and veg. 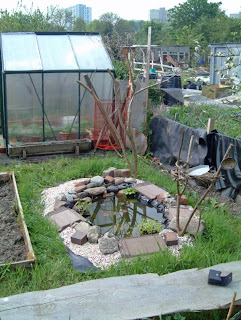 So about a year later the decision to give it up was not easy, but I had made up my mind

Some of the reasons why I came to the decision to give up plot 11. I found it a bit isolated. As the only woman working at the back of the allotment site, which is on the edge of an industrial estate and a cemetery that is often used as a short cut by people. I often found myself working alone, unless other allotmenteers or my wonderful neighbour Fitzy was about. There were many times, especially in the evenings, that you would find kids lobbing stones over, and hurling abuse – and even setting fire to the illegally dumped material behind the site. So I was beginning to feel unsafe, and beginning to find it all getting a bit stressing and uncomfortable at what I may face from one day to another. This was not what I thought an allotment plot to be. With the good, sometime can come a lot of headache, and this was a place I did not want to be.

During this time (late 2007), an allotment plot in the centre of the site came up. I went over and had a good nosy round. You could see it was once a loved and cherished plot. The structures were all in place, it had a great green house, a potting shed and a hut painted in baby blue – a shelter for when it rained. This was a luxury that I did not have at Plot 11. This plot was overgrown and neglected now and the wood around the raised beds were starting to rot needing replacing. I thought to myself, a bit of commitment and hard work, I could restore it back to it back to some of its former glory. So I had decided to register my interest for a transfer with the committee. Over the telephone I gave the Secretary my genuine reasons why and put my name down for this new plot. She told me a number of other people had also registered interest in taking it over, and chances were I would not get it. A long, long wait and month later I was notified that I was the proud owner of Plot 45. I was so delighted.

During this interim D realised he had developed his own green fingers, a passion for digging (not), and growing vegetables (oh Yes). D decided he would keep on Plot 11 and could grow things that did not need that much tending, like potatoes and berry fruit such as redcurrants, raspberries, gooseberries and so on. This was before we got married (which was only this October), and were still seen as two separate individuals, rather than a couple. This was accepted by the committee as we had both proved ourselves as hardworking individuals, responsible and proud plot holders - unlike some of the unkempt plots there. Tut Tut