My most favourite of favourites Nut Mushroom Wellington by far has to be from Nadine Abensur from her cookbook The Cranks Bible.  When I was a student I would often make it and slice it in individual pieces and freeze it, so when I had friends over or too tired to make something, I would go to the freezer and bake it in the oven served with steamed veg and gravy.

It's been a few years now since I've made a nut roast, and I mean one covered in puff pastry aka a Mushroom Nut Wellington, so that had to be addressed.  And with the sun disappearing on us again and it all going nippy again, a vegan nut roast with all the trimming was to be on the menu.

I was going to put a handful of shredded kale to the mushroom and nuts, but decided to throw in a handful of homegrown red chard, spotted amongst all the weeds in the garden. 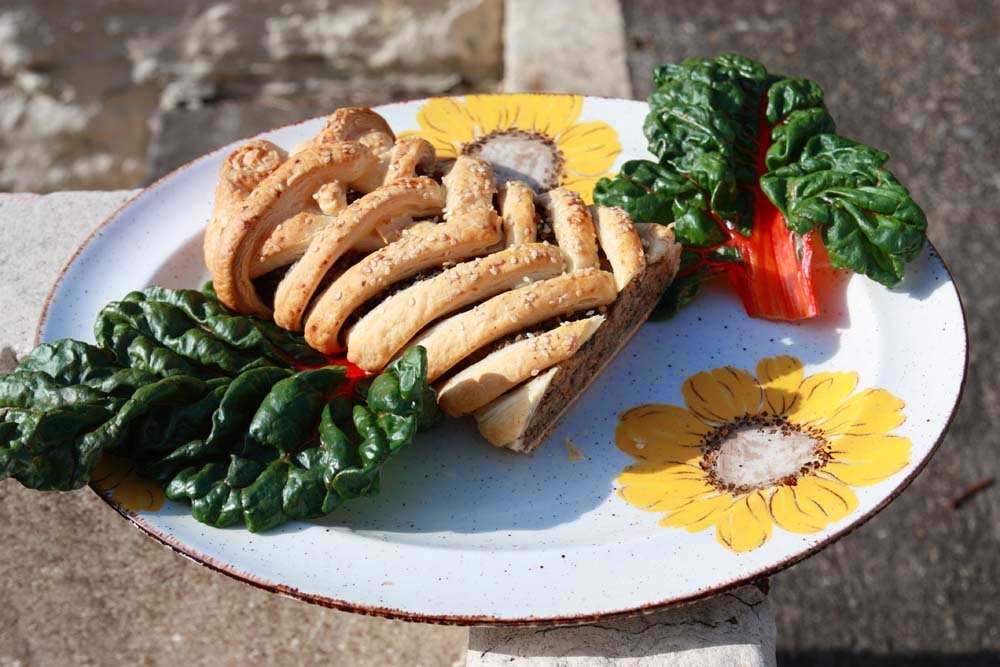 A couple of weeks back I made some progress weeding and digging the garden.  We were fortunate to have the nephews over bribed by the appeal of a home-made veggie burger with spicy wedges.  They helped their uncle dismantling the pergola and I did the digging, but the work in the garden came to a halt when both myself and D came down with some kind of bug.  Its not even halfway through the year and I have been poorly twice this year.  Feeling much better now, I am back in the kitchen and back to blogging.

Ruby Red Chard Mushroom Nut Wellington
Serves 6 - 8
Ingredients
1 tablespoon olive oil
2 medium red onions, finely sliced
3 cloves garlic
1 bay leaf
250g chestnut mushrooms, sliced
100g ruby red chard including stalks or other green leafy veg, chopped
1/2 teaspoon dried thyme or 1 teaspoon fresh
1/2 teaspoon paprika
2 teaspoons vegan Worcestershire sauce
200g mixed nuts, roughly chopped
Salt and pepper to taste
375g read rolled puff pastry
Optional: a little (non-dairy) milk and sesame seeds for topping
Method
Heat the oil in a wide pan and and cook the red onion, garlic, bay leaf until the onion is tender.  Stir in the mushrooms, chard including stalks, along with thyme, paprika and sauce.
Cook on medium heat until the vegetables have softened. turn off heat and allow to cool.
In a food processor, blitz the nuts, then top in the cooled mushroom-chard mixture and blitz again. Taste and adjust seasoning if necessary, give it a brief blitz.
Line a baking tray with parchment paper.
Roll the pastry out to 35 x 25cm and place onto the baking tray.
Spoon the mixture down the middle evenly.
Make a lattice with the puff pastry by cutting the pastry on both sides of the filling into 3cm strips, then fold over the top of the filling.
Optional: Brush with optional (non-dairy) milk and scatter over the sesame seeds
Bake in a  reheated oven, gas mark 4/180oc for 45 - 50 minutes or until golden.