Is it a Swede, no its a Turnip (neep)

Well it depends where you are.

I am about to post a recipe on my blog using Swede and whenever I do it causes much discussion. So I thought I'd show you a photograph of this vegetable.

For me this is a Swede and the vegetable below are turnips which are much smaller in size. 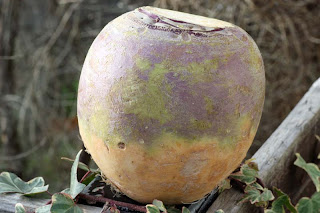 Author of The Great Big Vegetable Challenge writes 'turnips can be confusing'. Are they different to Swedes? She asked several gardeners who told her that the swede is in fact a Swedish turnip, known in the USA as rutabaga. To add to this confusion, in Scotland the swede is often referred to as a turnip or a 'neep'. I also flicked through one of my Scottish cookbooks: Scots Cooking written by the Sue Lawrence and virtually every recipe she has using turnip was bracketed with swede. She writes 'What we call neeps is actually short for turnip - which is in fact not what is called turnip down South (meaning England) but swede'. Here let me show you some growing at Mals Allotment in Edinburgh.

Anyway, whilst doing some research about the swede, I was surprised to learn that once upon a time in Scotland on Halloween the top of the swedes were topped, then the hard flesh inside was carefully scooped out and eyes, nose and mouth were carved out. The swede was treated very much in the same manner as the pumpkin is in the USA. These carved swedes were then threaded with a wire and hooked onto a stick. At night the children would parade the streets with their scary 'neep' lanterns. 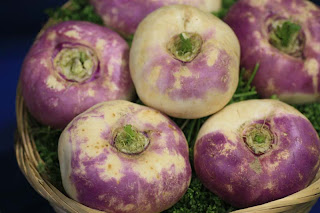 Anyway whether you call them a swede or a turnip, let us just agree to differ and acknowledge that this purple tinged vegetable is given a different name in different parts of the country, let alone the world.