Rose hips ripe and ready for the picking.

A couple of days ago, I went into work much earlier with plans to pick fresh rose hips from the bush. Unfortunately, as feared many of the fat pink hued globe baubles were just too mish mash. Others were frankly rotten by recent heavy downpours. However, I did manage to pick just under 500g and this is what I did with them: make my first jars of rose hip jelly. I am looking forward to spreading it on some waffles and pancakes in the coming months, and tasting its wonderful zingy flavour. 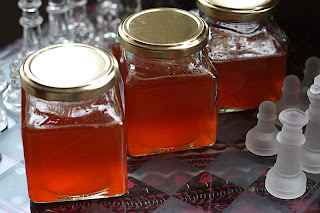 I have to admit that I found making the jelly a bit of a palaver. I don’t have strainer or a jelly bag, so had to start of using my colander first lined with muslin. I don’t have this gadget in the house, so had to be a little inventive. This was made even more difficult as I also did not have any stools, so I ended up upturning one of my nesting table and the muslin cloth was tied to my Turkish rolling pin. My husband laughed at my contraption. I responded, well it works. 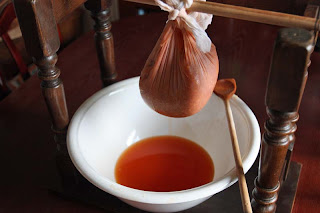 Very slowly it dripped.
I had a taste, it tastes rather zingy at this stage. Another thing I noted, because its called rose you assume the colour is going to be a rosy-pink. This is not the case. I looked at the juices, it was more faint orange. I looked at the photographs of other peoples rose hip jelly and noted a similar shade, so felt much better. The greedy and impatient person in me thought ‘All that work and I only managed to get 1 pint of rose hip juice’. But this recipe did exactly what it said, makes 3 x 225ml jars, except my jars were a touch larger 245ml. 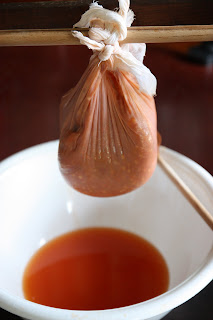 Classic Rose hip jelly from WI
Makes: about 3 x 225 ml jars
Prep: 45 minutes, plus straining overnight
Ingredients
500 g ripe rose hips, stray leaves, stems and flowers removed
2 tablespoons lemon juice
1 kg crab or cooking apples, roughly chopped, including cores, pips, skin
Caster sugar
Method
Wash and drain the rose hips. Chop roughly and put into a preserving pan with the lemon juice, apples and enough water to just cover. Bring to a boil and simmer for about 30 minutes until soft. Mash thoroughly to extract as much juice as possible. Strain through a jelly bag or muslin-lined nylon sieve, set over a large bowl. Do not press the fruit or squeeze the bag as this will make the jelly cloudy. Leave until the dripping stops. This may take several hours or even overnight.
Next, measure the liquid and return it to the pan along with 450 g (1 lb) sugar for each pint (600 ml) of liquid. Stir well over a low heat until the sugar has dissolved. Increase the heat and boil rapidly for 5–10 minutes. Test your jam for a set — setting point is 105C (220F). If necessary, boil for a further minute then test again. Continue testing at one-minute intervals, as necessary, until the jelly has reached setting point. Remove the pan from the heat, skim off any scum and allow to cool briefly. Carefully pour into hot, sterilised jars. Seal the jars and allow the jelly to cool completely before labelling and storing. This classic Rose hip jelly comes from the Women’s Institute Book of Preserves, but I got the recipe from here.