Although I treated my nephew to a haggis samosa over the weekend, I wanted him to try the real thing, no not the meat version, but the vegetarian version which apparently is much better than the traditional haggis; so I have been told. My nephew snug his nose, but said 'i'll eat whatever you feed me'. I had to convince him it was not something I ate everyday, just now and again. In fact the last time I had a similar meal was for Burns Night Supper.

Neeps and tatties are the traditional accompaniment to haggis, but I decided to make clapshot for a change. So what is clapshot? Clapshot is a Scottish dish similar to Northern Ireland's champ and also to colcannon. Clapshot differs by having the potatoes and turnips - called swede in England and Wales, and for short, neeps in Scotland, instead of the chosen green, whether its cabbage, leeks or spring onion. 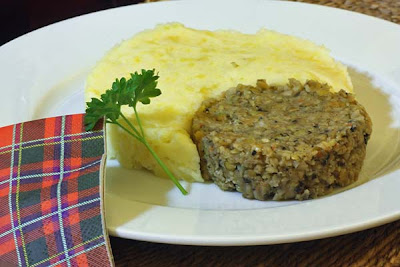 Some of you may have read early in the year, that the origins of haggis have recently been disputed. There are records of a similar 'sausage' in Greek writings, according to the famous Scottish cook, Clarissa Dickson Wright the origins are more likely to be Scandinavian - a legacy of the Viking raids. However shrouded in mystery the history of the haggis may be, there is no disputing the fact that Robert Burns brought it into the limelight through his poem 'To a Haggis'. 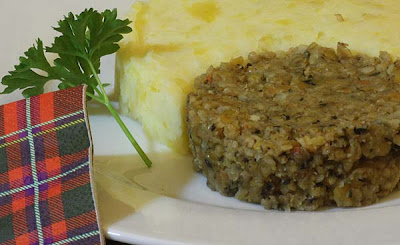 Our Scottish meal was warming and comforting, and I am pleased to report that my nephew enjoyed it, though he did sprinkle a lot of black pepper on his clapshot.

For sweets, I was going to make a cranachan, I like the pinhead oatmeal texture, but decided it was too cold too, maybe next time. Next year I intend to make my own vegetarian haggis too.

Happy St Andrew's Day for those of you celebrating it.

Clapshot
Serves 6
Ingredients
500g potatoes, peeled and chopped
500g turnip (swede) peeled and chopped
50g butter
Method
Put vegetables in two separate pots of cold salted water, then cover and bring to the boil. Simmer until the vegetables are tender. Return them to the pan, cover and shake the pan over a very low heat to dry them off completely. Then mash the vegetables together with the butter, season with salt and pepper.