White Bean and Cabbage Stew with a Scarlet Salsa

I made this dish only for two reasons. One because I had to use a cabbage picked last weekend (I think) and two, I have been hearing a lot about 'White Chilli Bean' dishes amongst British celebrity cooks. White Chilli Bean dishes have been around for awhile, a decade in fact, but they have only become popular in the U.K recently.

Anyway, I was curious to try out a white chilli bean, so I flicked though one of my American cookbooks and decided on a recipe which contained winter vegetables including swede (also known rutabaga). On serving, this White Chilli Bean to my eyes looked more like a Cabbage Bean stew with a vibrant salsa. It did not have the spice kick, the allure of vegetables such as colourful peppers, or the deepness of black or brown beans ' vegetarian chilli'. However, the salsa was pleasant. It made the stew come alive with its smoky undertones and the zing of the coriander. 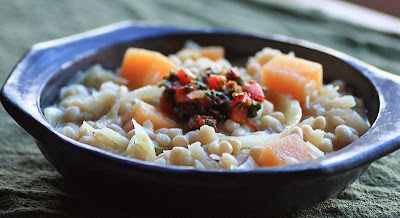 I am not saying that I did not enjoy this dish, I did, it just didn’t meet with my expectations of what a 'vegetarian chilli' should be like (an oxymoron I know), hence I have renamed it. I will at some point try out another 'white bean chilli' recipe. 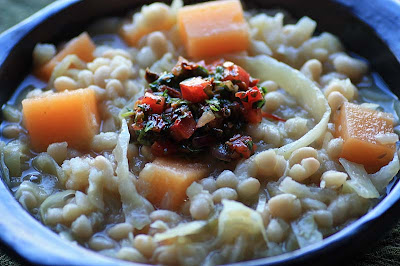 The resulting quantity of this dish gave us three, maybe even four meals: in a bowl as we had yesterday, in a wrap as we had today and with rice or even potatoes later in the week.
White Bean and Cabbage Stew with a Scarlet Salsa
Serves 6
Ingredients
For the White Bean Stew
200g dried cannellini beans, cooked and drained or two tins.
2 tablespoons of olive oil
2 medium onions, finely sliced
6 cloves of garlic, crushed
1 green cabbage, chopped into quarter, then finely sliced
1 generous teaspoon dried oregano
1 potato, cut into ½ inch cubes
½ swede, peeled and cut into bite sized cubes
Salt and pepper to taste
For the Scarlet salsa
1 ancho pepper
1 chipotle pepper
2 tablespoons of sun dried tomato in oil, minced
1 red pepper, seeded and finely chopped
1 small red onion, finely chopped
2 tablespoon olive oil
Juice from 2 limes
Bunch of coriander leaves, minced
Salt to taste
MethodFor the beans
In a large heavy pot, heat the olive oil. Add the onions, and sauté them until they soften. Add the garlic and cabbage and cook on low heat until cabbage is translucent. Add to the pot 4 cups of water, the oregano, the potato and swede cubes. Season with salt and cook for 30 minutes, until the vegetables are tender. Add the beans and mix well, then add a further 2 cups of water and cook until thickened.
For the salsa
In the meantime make the salsa. Soak both the ancho and chipotle pepper for ten minutes, cut open and remove seeds. Then mince finely. Place in a bowl with the remaining ingredients, including salt to taste. Leave aside for the flavours to combine. Serve in large bowls with a spoonful of salsa on top. Adapted from Vegetarian Planet by Didi Emmons.