I picked up some Jerusalem artichokes at the weekend from a food producers market.  Come rain or shine, I find myself there every two weeks now.

The plan was to make some Jerusalem Artichoke crisps - my favourite way to eat what is otherwise described as 'farty chokes', but with it being rather cold, I opted for soup.  The crisps were not forgotten, I made them too.  Instead of serving the soup with bread or topping it off with crunchy croutons, I decided on crisps - well why not?! 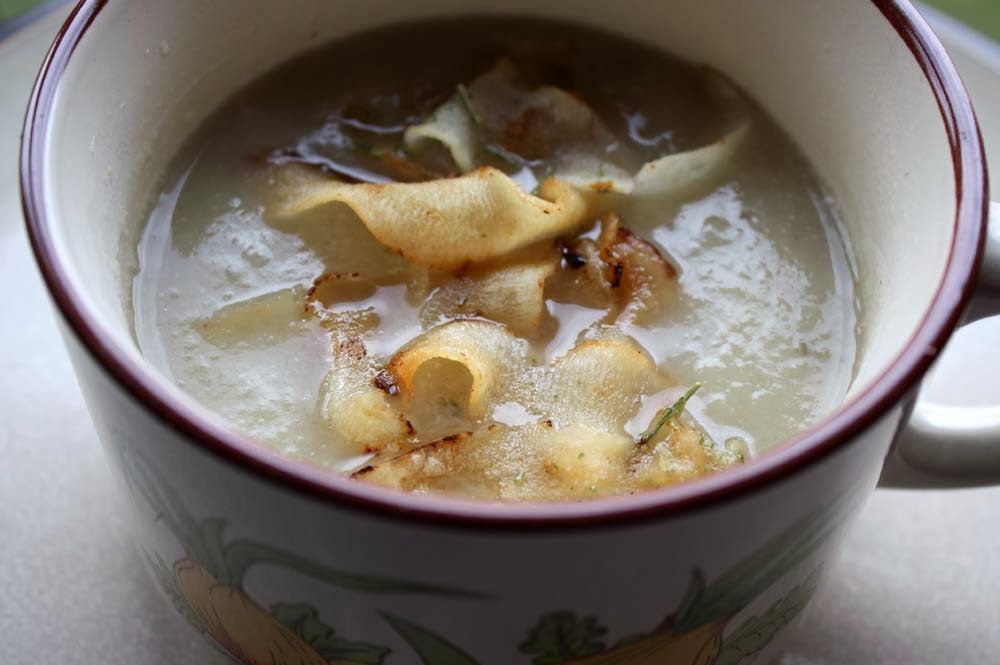 Here's the recipe if you want to make some yourself.  If you don't make the soup, at least try the crisps which are best eaten on the day made as they lose there crispness if kept longer!  I am sharing this soup with No Croutons Required. The challenge this month is to create either a soup or salad with veggies, and I've gone seasonal with Jerusalem Artichokes, a much overlooked winter vegetable. NCR is alternately hosted between Lisa this months host, or Jacqueline of Tinned Tomatoes and; Eat Your Veg and Bangers and Mash for the hidden veggies theme for Family Foodies.

Jerusalem Artichoke and Rosemary Soup with Jerusalem Artichoke Crisps
Serves 4
Ingredients for the Soup
1 pint of vegetable stock made with 2 teaspoons of bouillon
1 onion, finely sliced
2 tablespoons of olive oil
1 rosemary stalk
500g Jerusalem artichokes, chopped into even size chunks
Salt and pepper to taste
Method
Soften the onion slices in the olive oil, till soft, then add the artichokes with the rosemary stalk, cook for five minutes, then add the stock, bring to the boil.
Then turn heat low and allow to simmer for 30 – 35 minutes, till artichokes are soft.
When cool enough to handle, remove stalk and blend to puree and return to pot. Add seasoning to taste.
For the Rosemary Salt
In a pestle and mortar or  in a grinder add 1 table spoon of sea salt and a couple of stalks of rosemary, then pound or grind to a powder.
For the Parsnip Crisps
Vegetable oil for frying Jerusalem artichoke crisps
200g Jerusalem artichokes, peeled and then sliced into crisps, using either a mandolin or a potato peeler.
Method
In a wide pot, put in enough oil so that it is about ¼ way up the pot.
Then heat oil and fry slices in batches until the artichoke crisps float to the top and are slightly brown. Drain off excess oil then sprinkle over the rosemary salt powder.
Pour soup into bowls and top with crisps.