The bookmarked recipes on my blog continue.

This Roasted Broccoli and Apple Salad is my second bookmarked recipe from Kristy Turners But I could Never Go Vegan, the first was BBQ Cauliflower Salad. 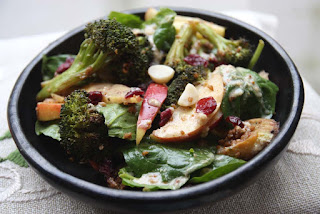 I was tempted to make this Roasted Broccoli and Apple Salad for two other reasons. First, its nearly summer and we need more salads in our diet; and secondly, my blogger friend Johanna who blogs over at Green Gourmet Giraffe had made this very salad a few months back and it got me interested in trying it, especially as apples are replacing bananas in my fruit bowl at home and in the lunch box. 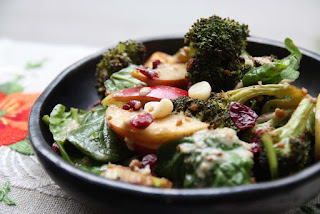 So over the weekend, I made an effort to make it.  It was lovely with lots of varying textures and bursts of flavours. We both really enjoyed the freshness of this salad.  It was also very substantial that we did not need to eat anything else later.  Just a couple of pointers though  in relation to the final assembling of the salad. I could not source dried cherries, so picked up a snack pack of dried cranberries.  Also I did not have almonds to hand and used macadamia nuts instead they came in the same snack packet as the cranberries.  Also my dressing was not creamy looking or creamy at all.  It was a little curdled, perhaps because I used white wine vinegar instead of apple cider vinegar as I had run out of it; or simply perhaps the tahini wasn't whisked enough on my part, but that did not stop us from scoffing the load down.  Secondly, its not as pretty as it can be as I could not track down any red cabbage - there seems to be a shortage of red cabbage in the UK.  Every supermarket I went to did not have any red cabbage in stock.  I guess I should not be that surprised as its not in season.

I also made the Sausage Sunflower Crumble, but its not pictured here. It reminded me a lot of Adam Sobels Sunflower Chorizo as featured in his most excellent debut cookbook Street Vegan. It was terribly old fashioned yet satisfying doused over the salad; I just wish it did not stick between my teeth and the need for toothpicks and dental floss. 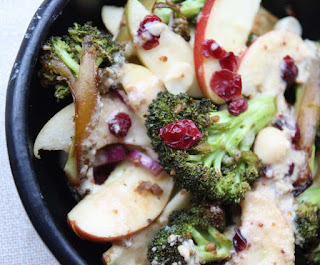 You can find the recipe for Roasted Broccoli and Apple Salad on Green Gourmet Giraffes website which was reproduced on The Full Helping. Next bookmarked recipe from the cookbook are Paprika Potato and Shroom recipe and Samosa cakes.

I am sharing this Roasted Broccoli and Apple Salad with Soups, Salads and Sammies hosted by Kahakai Kitchen.