In My Kitchen February

In my kitchen this February, I have lots of citrus fruit: oranges, limes and lemons. 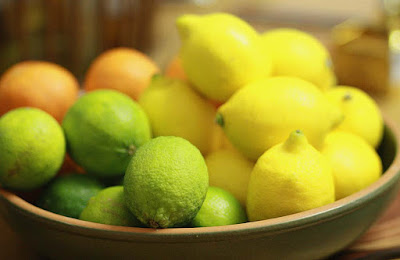 I have had a sore throat for a long while and am on antibiotics.  The doctors can't figure out what is wrong and I am on a waiting list to see a specialist.  I have tried lots of over the counter medicine, but had to resort going to the doctors eventually. 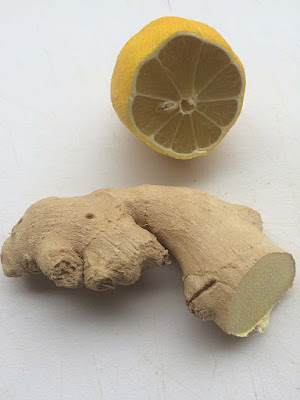 I am trying to drink a lot more water, but you know water can be a bit boring, so I have tried to perk it up with some fresh ginger and lemon. 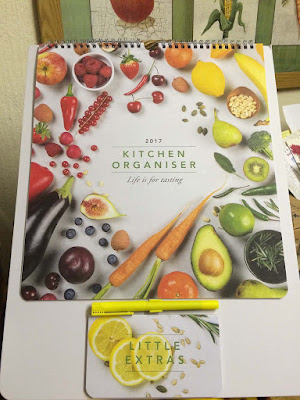 In My kitchen is an organiser gifted to me over Christmas by a work colleague.  I quite like it. I have to admit though that I don't have any wall space and this is hanging inside one of the kitchen cupboards which is a bit of a shame as I have forgotten about it. 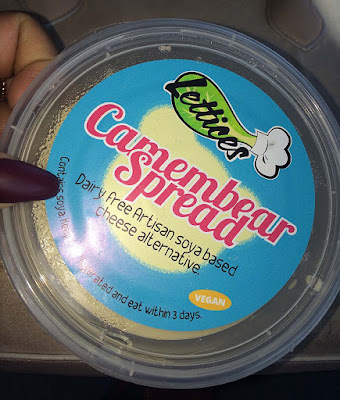 Over the weekend we went to the Cardiff Viva Vegan Festival - check out this link if you want to see more.  I came home with a few things, most of which had been consumed on the day. The only two things I have to share with you now are this Dairy Free soy based cheese mimicking quite well the flavour of Camembert. 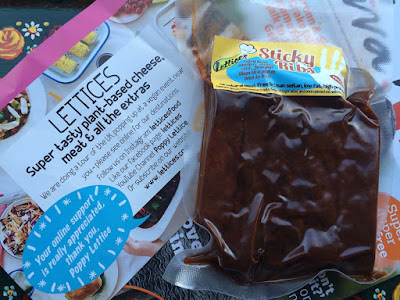 And some seitan Sticky 'Ribs'. 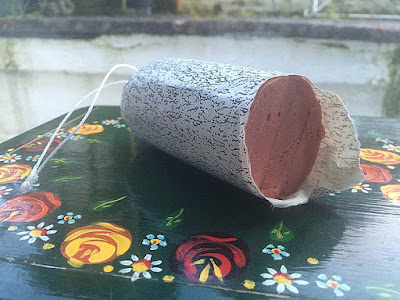 We finally got to opened the packet of Vegan Italian Gourmet Sausage. For those of you who were curious to see what it looked like once open, here it is (click this link to see it in its original packaging), please note the mottled effect wrapping on the outside was paper, I was surprised at this as I had originally thought it was some kind of edible rice paper. The flavour of the Gourmet Sausage was intense, as someone who used to eat fish - I could only compare the flavour to 'salmon pate' and the colouring too. I'd buy it again, but more with other people in mind next time, its too much for just a couple. 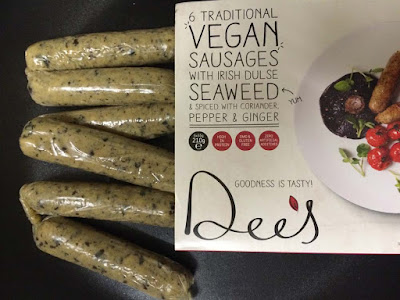 I am being given more and more additional responsibilities at work (not being recompensed for it though, not yet anyway) and this means that the past couple of weeks I have relied on shop/brand mock meat products for quick evening meals.  One new product that I have tried recently was Dee's vegan Sausages with Irish Dulse Seaweed.  I liked the flavour and it was interesting to see ho the outer vegan sausage skin crisped up, but once it was sliced, it was a little mushy.  I quite liked it, but D did not - for him they did not retain the firmness you'd expect from a  sausage, albeit a vegan or vegetarian one. 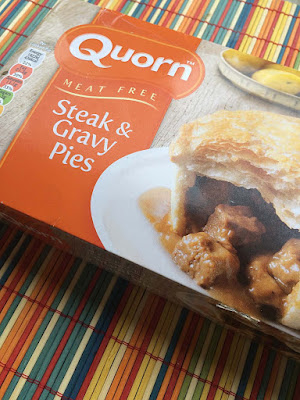 We have also had Quorn Steak and Gravy Pies.  Yes, I know I make awesome homemade pies - but like I said sometimes we pick ready made products purely out of convenience (and other times out of greed or curiousity).  I am not always a fan of Quorn, but my husband thinks the texture is good at least for sausages.  We I have to say we were both impressed with these, on flavour and the chunkiness of the steak pieces, they were proper chunky.

We have just finished indulging in these homemade Czech cookies made by hand by my good friend at work.  Over the past two years we have become quite close and are able to talk about issues at work that impact on us - you need friends who are on the same wavelength as you and its nice, as I often feel isolated in relation to the work that I do. 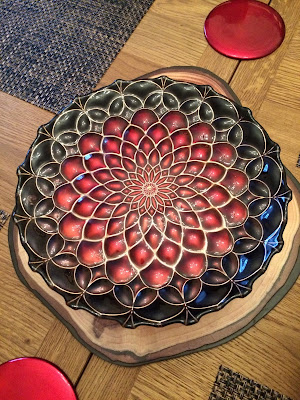 This rather stunning cake stand was also a gift from her too for Christmas.  It adorns our table in the dining room - yes we have a dining room, that becomes library, computer room and close the door and 'leave me the alone' in room. 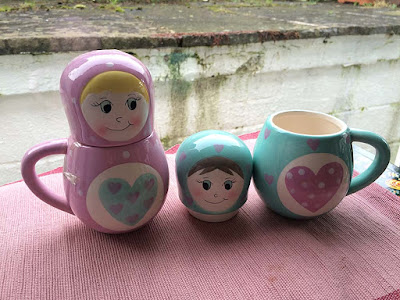 I found these two quirky Russian Doll mugs in a charity shop a while back.  I thought they were fun and picked them up for my nieces, I don't think they will appreciate them now as they are growing teenagers now, so am a little undecided what to do with them at the moment. 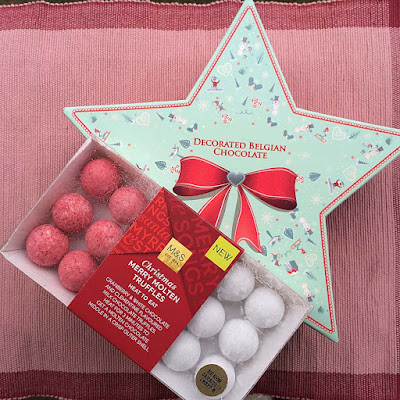 We have lots of chocolate still to eat, all left over from the Christmas and the New Year holidays; and these are only those those that I have taken a photograph of, there are at least four more boxes. 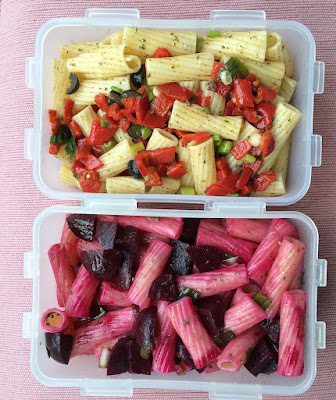 Even though I have been a bit lazy with making some of our evening meals, I have been good at making pasta salads for our working lunch.  Here are two tubs ready to go.  The top is a chilli pasta with pepper, spring onions and black olives; and the one below is Beetroot and Spring Onions. 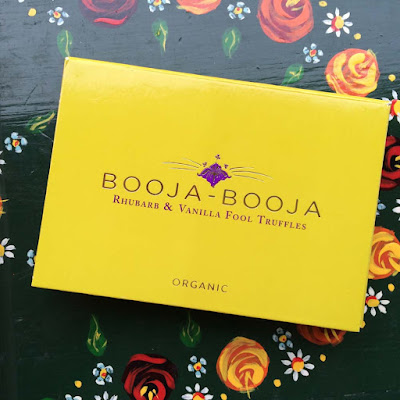 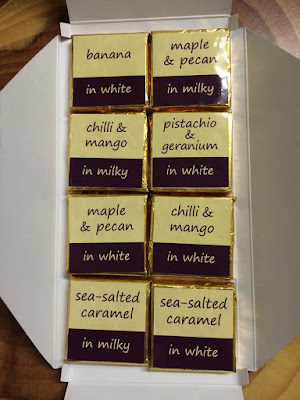 And mo chocolate! Please don't ask.  I picked these up at the weekend from the Viva Vegan Food Festival,   Silly of me I know especially as I have lots at home - but I was tempted by the flavours: maple and pecan, chilli and mango and sea salted caramel - yes I am guilty of being greedy. 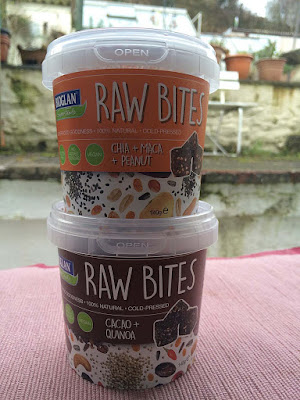 I have some tubs of Raw Bites: Chia Maca and Peanut and the other is Cacoa and Quinoa.  I figured on the days that I run out of homemade breakfast flapjacks for work, I can fill a small tub and give some to my husband to mucnh on instead, it would make a change for him from the oaty flapjacks. 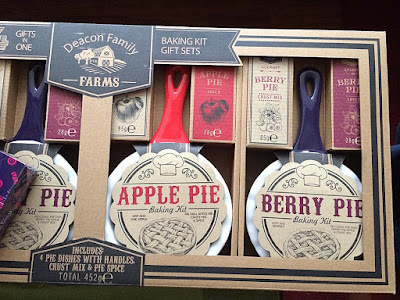 I have a number of kitchen related stuff that I got over Christmas that I want to share, but I haven't got round to taking photos of them, but here is one a Baking Kit gift set comprising of 4 mini ceramic pans to bake apple pie or berry pie. The pans are quite cute. 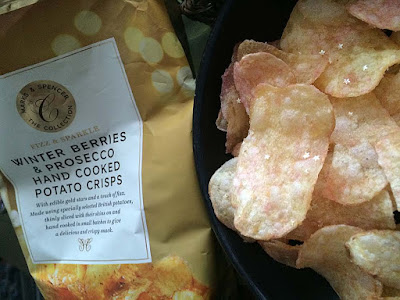 And finally I found a bag of Winter Berries & Prosecco Hand Cooked Potato Crisps from Marks and Spencers that I picked up for Christmas but forgot about.  I was tempted by the gold edible stars - can you see them?!  The crisps themselves were quite zingy.


I am sharing this with Lizzy of Bizzy Lizy Good Things for In My Kitchen series.  IMK was started by Celia of Fig Jam and Lime Cordial and its one of my favourite blog events to join in with as I get to nosy in other peoples kitchen, please do join in.