Every year I make the same Cinnamon Plum Cake.  This year I wanted to try some different recipes including an Upside Down Plum and Raspberry Cake.

Well this is supposed to be a Plum Studded Cake, except the plums got engulfed by the cake batter and disappeared beneath the golden cake. 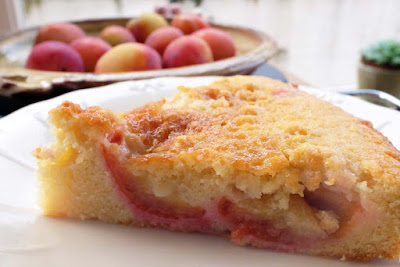 You can imagine my disappointment as it does not make a good photograph, but it was nice to eat, so instead I have dubbed it Drowned Plum Cake. 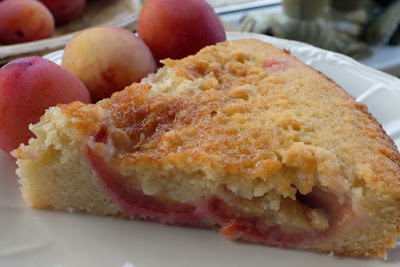 Well as well as making this drowned plum cake, I have also made Three variations of my popular Cinnamon Plum Jam, these include Plum Jam with Liquorice, Plum Jam with Star Anise, and Plum Jam with Vanilla. These will be gifted to unsuspecting new work colleagues come Birthdays or Christmas. 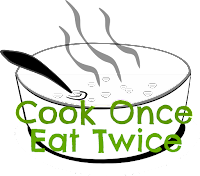 I am sharing this recipe with Cook Once Eat Twice hosted by Searching for Spice.


Makes 8 x 190ml jars
Ingredients
1 kg plums, core removed
100ml water
1 kg sugar
1 teaspoon ground liquorice powder or 2 star anise or 1 vanilla stick, scraped
2 teaspoons lemon juice
Method
Place plums over a medium heat with water and simmer gently for 10-15 minutes, until tender and reduced.
Pop a couple of saucers into the freezer to chill.
Add the sugar, cinnamon/liquorice/star anise or vanilla and lemon to the pan and cook, stirring to dissolve.
Bring to the boil and then allow to simmer rapidly until it reached the desired consistency. 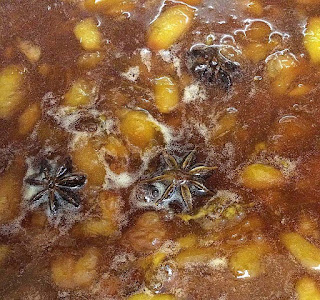 Put a teaspoonful of jam onto a chilled saucer for 1 minute. Drag your finger lightly over the jam.
If it wrinkles, it has reached setting point; if it doesn't, boil for few more minutes and test again with another chilled saucer.
You just need to be a little patient.
Transfer to sterilised jars and seal.
Adapted from this recipe.

4 - 5 ripe plums, stone removed and sliced in half
1 tablespoon golden caster sugar
1tablespoon plain flour
Method
Preheat oven to gas mark 4/80oc.
Line a 10 inch round cake tin with non-stick baking paper.
In a bowl, beat the butter until soft, then beat in the sugar.
Whisk in the eggs, one at a time.
In another bowl, combine the flour with the salt and baking powder and stir them carefully.
Add the dry ingredients to the butter mixture.
Stir carefully with a spatula. until combined.
Pour into the baking tin.

In another bowl, add the sugar, then carefully add in the sliced plums and stir to coat.
Then stir in the plain flour and stir to coat well.
Arrange them on top of the cake batter.
Transfer to over and bake for 35 - 40 minutes or until golden and firm to touch.
Remove from the oven. 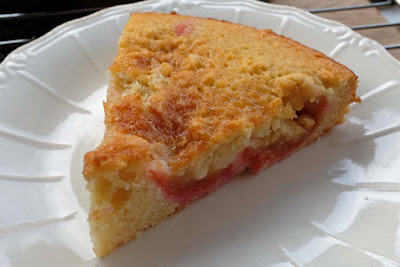 Allow to cool, before removing from the tin.
Enjoy with a dollop of thick cream.
Adapted from Mollie Katzen's Sunlight Cafe