Today I share with you a Savoury Cherry Tomato Clafoutis - I made this on Sunday after teasing D all summer that it would be the first dish I would make with his homegrown tomatoes, it wasn't though. 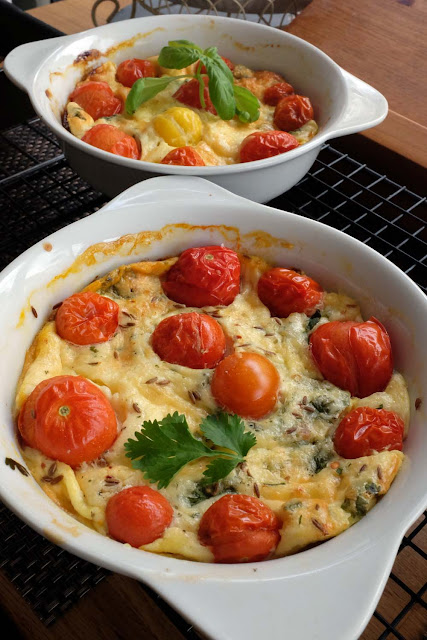 Traditional clafoutis is a sweet batter dessert made with black cherries, this savoury version is adapted from a cookbook and I have had it bookmarked for a long long time.  The original recipe uses basil, but of course I had to inject my own into it with spices and stronger herbs.

I made two versions, one basil (above) and the other coriander, chili and cumin  - you can see from the difference between the two if you look closer. 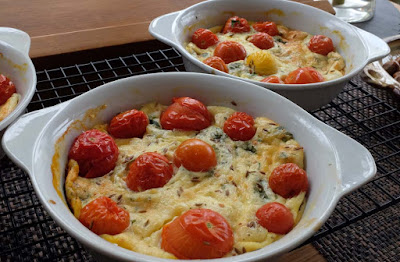 Don't they look fancy in the gratin dishes?!.  I got the gratin dishes for the vegetarian café and sadly don't get used much these days as they are tucked away in boxes, so it was nice to bring them out and make the dish a bit more fancy.

The clafouti had puffed up wonderfully like a soufflé, but then fell back down whilst D was taking these photographs (see the golden sides).  It is one of the most delicious dishes I have had for a long while. 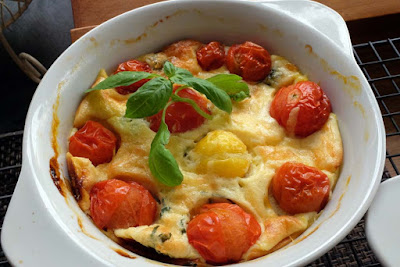 For my vegan readers, I know this is perhaps one of the easiest dishes to veganize with chickpea flour, it may not puff up the same, but it will taste good.
Savoury Cherry Tomato Clafoutis with Coriander and Cumin
Serves 4
Ingredients
A little butter for greasing the gratin dishes or other ovenproof dishes
40 cherry tomatoes, distributed between four ovenproof gratin dishes
4 eggs
25g plain flour
200g crème fraiche
4 tablespoons milk
Handful of coriander, roughly chopped
Salt and pepper to taste
1/2 teaspoon chilli flakes
1 teaspoon cumin seeds
60g cheddar cheese, grated
Method
Preheat oven to gas mark 5/190oc.
Lightly grease four gratin dishes.
Distribute the tomatoes between them.
In a bowl, beat the eggs, then sift in the flour and whisk in, then carefully beat in the crème fraiche and the milk until the batter is smooth.
Season to taste with salt and pepper, then stir in the chilli flakes and the coriander.
Pour the batter over the tomatoes and sprinkle the grated cheese and the cumin seeds.
Bake for 25 -- 30 minutes or until puffed up and golden on top.
Serve with a green salad.
Adapted from Vital Vegetables from BBC Good Food Magazine (1999)