Wales is still not popular for its vegetarian cuisine, its often seen as the land of Welsh lamb, cockles and mussels, faggots - a Welsh meatball made from offal and meat off-cuts.  But what many people do not know is St David, the Patron Saint of Wales was a vegetarian.  I speculate, but its possible that St David may actually have even been a vegan as he only ate bread, vegetables, herbs and only drank water.

The green green lush land of Wales has also given us leeks and laverbread. Laverbread or 'bara lawr' as it is known in these part of the Welsh valleys.  Laverbread is not actually a bread, its a seaweed, that is cooked down to a jet green paste famously described by the acclaimed Welsh actor Richard Burton as 'Welshman's caviar'.  Laverbread is often enjoyed with shellfish, buttered toast or as Laverbread Cakes.   The best laverbread comes from Selwyn's who are based on the beautiful shores of the Gower Peninsula.

So today for St David's Day celebrations, I present to you an alternative Welsh vegetarian recipe that makes an interesting  change from the traditional Selsig Morgannwg - Glamorgan sausages and Welsh Rarebit - homely cheese on toast.  This recipe is made with both Welsh leeks and laverbread and also happens to be vegan.  Behold the Welsh Bara Lawr Seitan Sausage that I have created especially for the 1st March, celebrating the Patron Saint of Wales and all things Welsh. 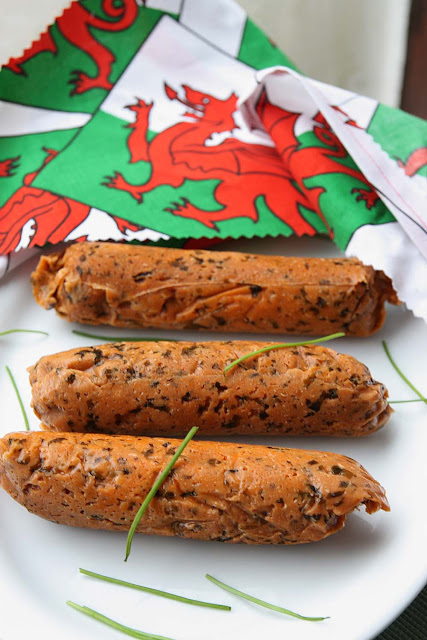 I was inspired to create these vegan Welsh sausage with laverbread for two reasons.  One I had read somewhere in the past that someone somewhere in Wales had created a meat version of laverbread sausage; and two, I had recently had a vegan sausages made with Irish Dulse Seaweed  and that's was me on the path to making a vegan alternative of Welsh Bara Lawr with Seitan. 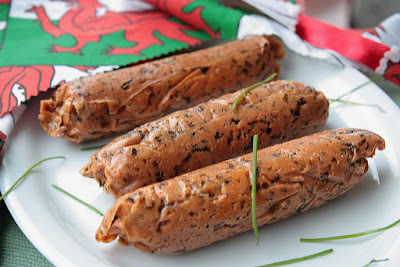 We have sliced and pan fried them and enjoyed them with mashed potatoes, two veg and gravy, but you can also cook them whole.  The flavourings in these  Welsh Bara Lawr Seitan Sausage is based on my vegan Welsh Faggots (Ffagod) recipe.  I think the recipe still needs a little tweaking, but I am happy to share it with you today.

160ml water
2 tablespoons Olive oil
2 tablespoons tomato paste
2 tablespoons tamari
2 - 4 tablespoons averbread (either from a tin or fresh if your lucky to live in Wales)
1 shallot or small onion, shredded or minced
Method
You will also need 4 - 5 pieces of foil.

Divide dough into 4 or 5 equal pieces and roll into sausage shapes.
Place on foil together and wrap firmly around the dough.
Twist ends of foil to secure filling.
Repeat with the remaining pieces.
Place each directly into a steamer and steam  45 minutes.
Allow to cool for an hour before using, or for best results chill overnight.


Store it in fridge tightly sealed or freeze.
To use, slice or chop and fry before adding to your recipe.