I have already mentioned in a previous post that I am having a thing about veggie meatballs at the moment.  This is my third dish featuring vegan meatballs in one month. 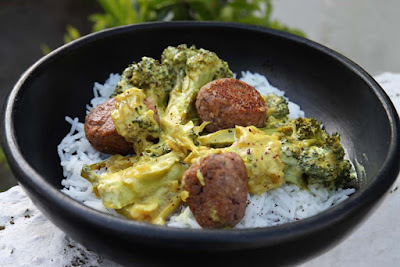 Before I went vegetarian, there were only a few meat dishes I would eat: chicken wings to hush my mother from nagging me for not eating meat when I was growing up under her eyes, minced meat samosas and meatballs.  When I left home for University, I did not miss meat dishes and accidentally found myself becoming a vegetarian, these days my diet is probably 95% vegan, so I guess I am veganish - but not vegan at all as I still eat cheese and consume a little milk and eggs on occasion, mostly in recipes.

For some reason these crisp sienna coloured 'meatballs' have been calling my name and I am so pleased in the knowledge that I can make my own, but there are also some good brands out their, that all you have to do is defrost them and pan fry in a little oil.  The veggie meatballs that I have used here purely out of convenience come from a packet mix and these are enhanced with parsley and the tang of sumac, cooked and then tossed in a Broccoli Turmeric Sauce. 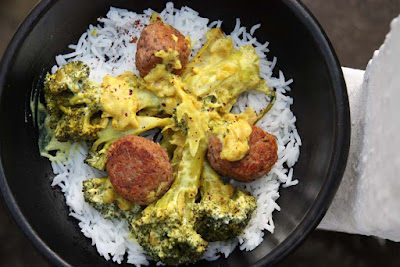 I have to admit, this recipe was also inspired from  Nigel Slater's recipe for Lamb Meatballs with Sumac and Broccolii as featured in The Guardian early on in the month.  I  adapted it to make it suitable for vegetarians.   I actually preferred this meatball dish compared to the Mushroom one, whereas D preferred the Mushroom Sauce one.  The flavours in this Broccoli Turmeric one are a lot more lighter and look at the awesome colours. On first appearance, D said he thought it was Thai flavoured and assumed it was made with coconut milk, but its actually made with creme fraiche.  I guess if you want it to be vegan you could use coconut cream.
Other sumac recipes on the blog
Sumac Popcorn
Sumac Spring Rolls
Sumac Cabbage


20g fresh parsley, minced
2 teaspoons sumac
Method
In a large bowl, stir in 175g packet of Sausage mix, herb and spice.
Then carefully pour in 300ml cold water, stir well to combine and then let it sit for 30 minutes to thicken.
Set aside, while you get on with making the  base
Assemble the Meatballs
The sausage mix should be thick now, with you hands scoop out around a large tablespoon and roll into small round balls, keep doing this until you have used up all the mock sausage meat.
I managed to make around 16 with my hands, but you may make more or less, just bare in mind that this will be divided between 4 people.
When done, heat a little olive oil in a large frying pan and pan fry them, ensuring all sides are golden and done.
Remove with a slotted spoon and set aside.

For the Broccoli Turmeric Sauce
3 tablespoons olive oil
2 onions, finely sliced
2 teaspoons ground coriander
1 teaspoon turmeric powder
Salt to taste
360g broccoli, sliced length ways and florets
200g creme fraiche or coconut cream or vegan alternative
Optional: extra sumac for sprinkling
Method
In a wide pan, heat the oil and then stir in the onions, cook until transcluscent and soft.
Stir in the spices, salt and cook for a couple of minutes
Add the broccoli to the pan along with 100ml water.
Cover and cook on medium heat for the broccoli to begin to soften.
When you can pierce a fork through the broccoli without effort, stir in the creme fraiche.
Then carefully stir in the vegetarian sumac meatballs to warm through.
Serve immediately with a sprinkling of sumac if desired for extra tang!
This recipe is inspired and adapted from Nigel Slater's recipe for Lamb Meatballs with Sumac and Broccoli as featured in The Guardian.