Some Festive Eats over Christmas

I hope my readers had a good Christmas break.  I had a good one and I must confess I am pleased as I am still on my holidays, I don't go back until after the New Year.

So with some time on my hands, I thought I would share some homemade festive eats. 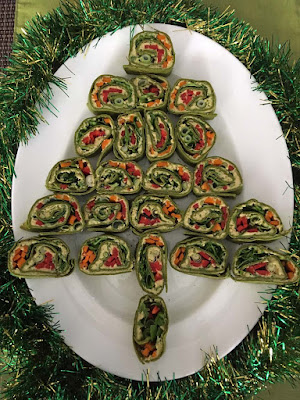 A very simple and easy recipe for pinwheels made to look like a Christmas tree.  These are green wraps filled with hummus, strips of yellow, orange and red peppers, rocket and spring onions. 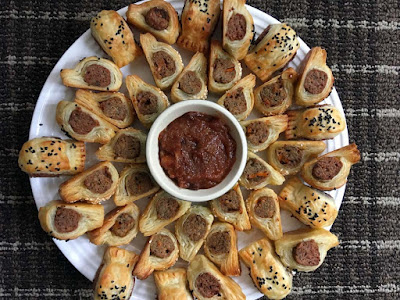 Vegan sausage roll bites in two flavours: apricot and yellow pepper; the other was beetroot and horseradish served with Smoked Paprika Ketchup. 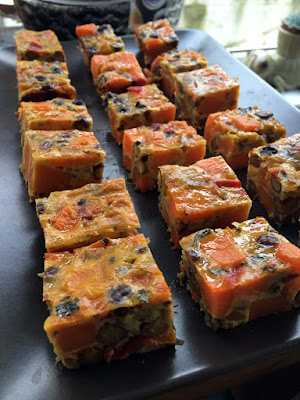 As well as the homemade chocolate 'salami', I made another festive bookmarked recipe from the Green Gourmet Giraffe, this time for Gingerbread Cookies.  This was also actually an excuse to play with my box of eclectic cookie cutters. 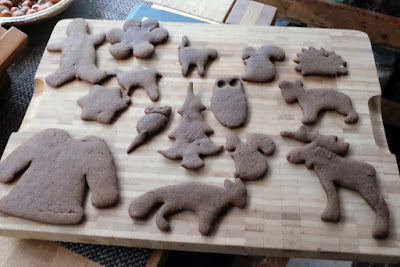 I did also use my new Welsh Dragon cookie cutter too, but on transferring to the baking sheet it collapsed, so I gave up - I think its intricate detailed design is good for a sturdier cookie or biscuit dough like shortbread. Although nice and shapely, I did not get round to decorating the cookies with icing, but it was not necessary, as the cookies were really good, not hard like biscuits but soft and chewy on the inside.  There is an aftertaste, its the blackstrap molasses.  Blackstrap Molasses is an acquired taste, good job we like it. These also proved surprisingly popular with some of my guests. 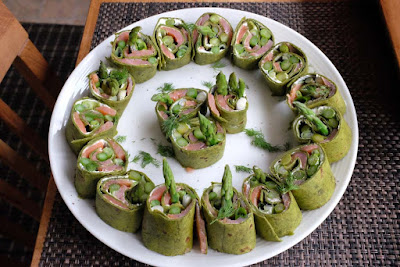 I also catered for the piscetarians in my life, with these smoked salmon cream cheese asparagus, though had i been organised, i would have also made vegan smoked carrot 'salmon'. 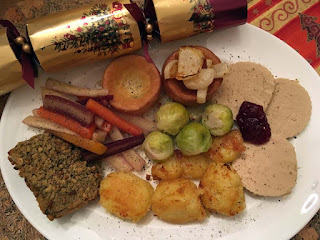 We had three variations on Christmas dinners over the festive period with different people around the table.  This is the only plate I managed to get a photograph of. Yes for the beady eyed among you, there is Quorn on the plate, rather than homemade celebratory nut roast or seitan roast, Truth is, I wasn't organised enough, but I am not that bothered as there will be other opportunities to make and eat nut roast and seitan roast over the coming new year - after all such food should not be consigned to the festive time.

There was also mince pies, and lots and I mean lots of chocolate. 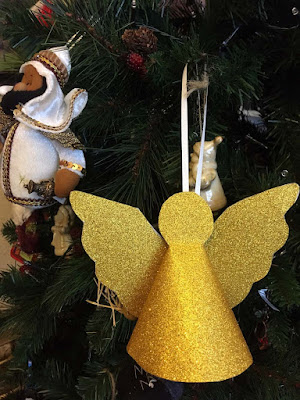 I received lots of lovely gifts, (not all pictured here including a couple of t-shirt, toiletries and an eyeshadow palette). 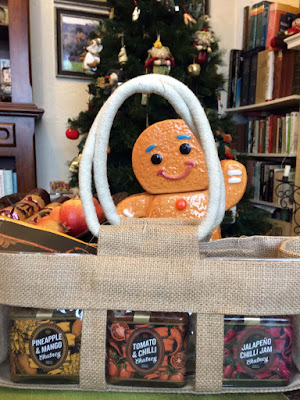 To add to my shelves: Pineapple & Mango chutney, Tomato and Chilli Chutney; and Jalapeno Jam. 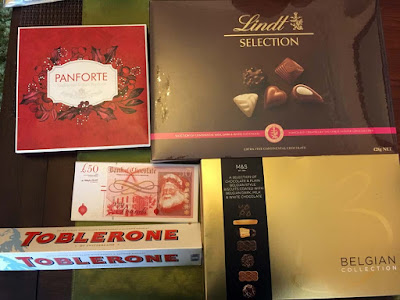 This is honestly, just a small selection of chocolates we were given.  D gave me the Panforte from John Lewis as the one I had made at home did not turn out well - I was gutted. He could see that I was upset about it, so it was very thoughtful of him to treat me to one instead. 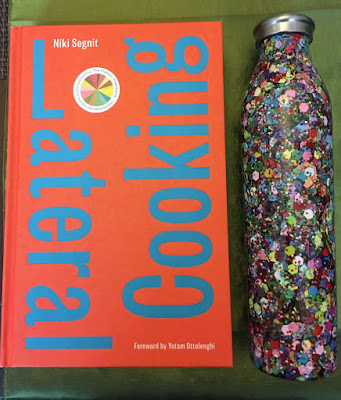 I told D I did not want any cookbooks this year.  He was really shocked.  Its very easy for me to get tempted by cookbooks - I have shelves full of them.  However this year I have been trying to peruse those already on my shelf, borrow from my library and for books, I really want I will order them - but this year, I haven't been tempted by many. Saying that though, D still went ahead and got me two cookbooks: Vegan Mock Meat Revolution by Jackie Kearney (not pictured) and  Lateral Cooking by Niki Segnit.  He told me he nearly bought me Samin Nosrat Salt Fat Acid Heat as I really enjoyed the series on Netflix, but stopped in his tracks. 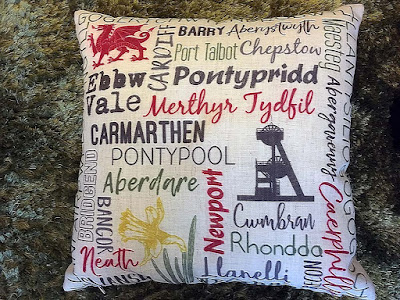 I was given a Welsh cushion with names of Welsh towns and cities. 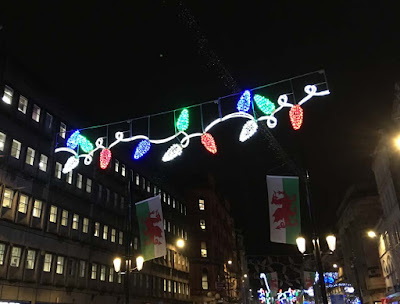 The week before Christmas we went into the City of Cardiff for shopping and a meal. 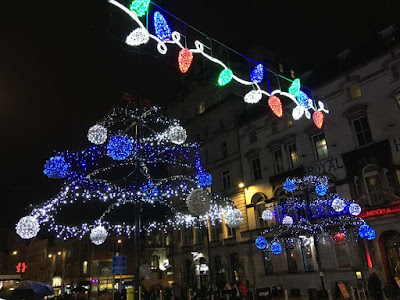 Here are some photographs of the Christmas lights in and around the city centre. 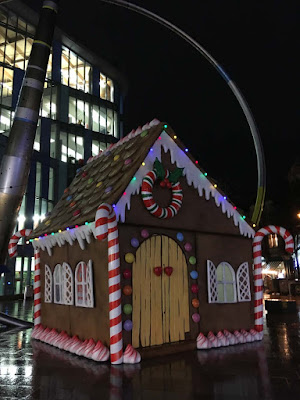 This Gingerbread Mun House  is set up by give DIFFerently a charity that relies on donations and then those donations become small grants to help people in Cardiff move away from homelessness. 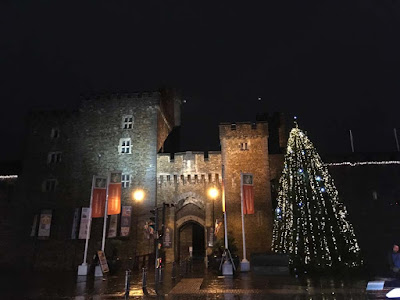 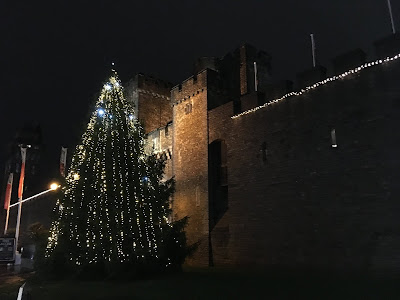 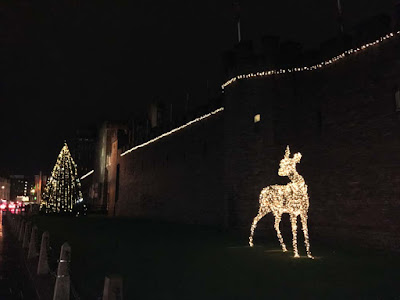 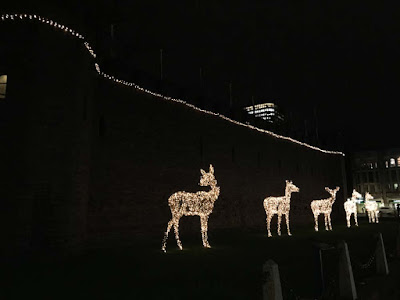 Cardiff is quickly building a reputation as the City of Arcades.  hen we went to explore the 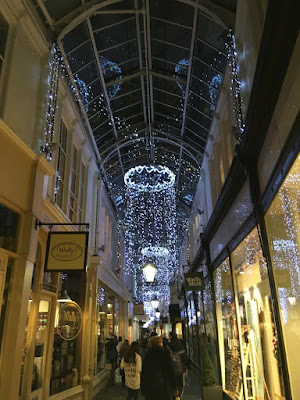 The above - Castle Arcade is perhaps my favourite, as it has one of my favourite shops in there - Wally's - I visit it whenever I am in Cardiff. 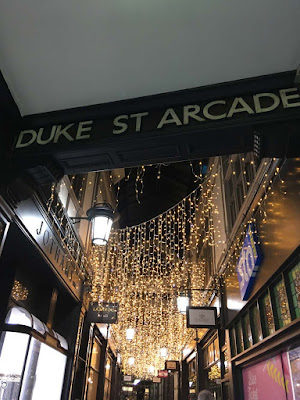 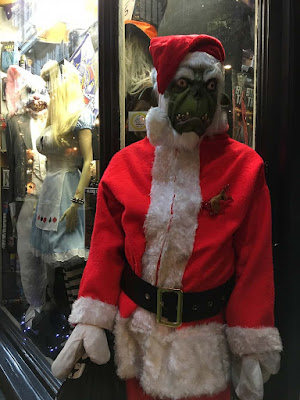 By the way, I hope you were good as this is Grinch Santa and his creepy buddies! 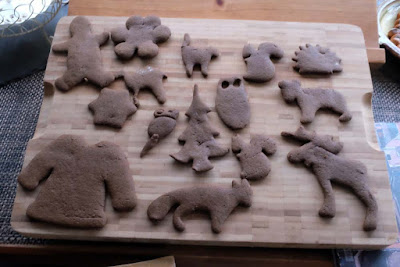 Gingerbread Cookies
The recipe once again comes via The Green Gourmet Giraffe, but I've also shared it below converting to grams from cups.
Makes a lot
Ingredients
125g soft butter
440g plain flour plus extra for kneading
160g molasses
1/4 cup golden caster sugar
1 egg, beaten
1 teaspoon ground ginger
1/2 teaspoon ground cinnamon
1/2 teaspoon bicarbonate of soda
1/2 teaspoon fine salt
1 teaspoon white wine vinegar
1 tablespoon hot water
Method
Put all the ingredients into a large bowl.  Then with your hands stir and press the ingredients until it becomes a soft dough.  Knead on floured board for 30 seconds or so.
Place dough back into bowl and put in fridge to chill until ready to bake.
Using a rolling pin, roll out to 5mm thick.
Use cookies cutters to cut out shapes, transfer to baking sheet.
Bake for 15 minutes at gas mark 3/160oc or until beginning to brown.
Remove from the oven to cool.
Please see Johanna's blog post on tips