I have mentioned before that one of the most popular recipes on my blog is the vegan Chorizo sausages made with vital wheat gluten thanks to Terry Hope Romero.

Since vital wheat gluten is a lot more accessible now and stocked by many health food stores across the UK,including most cities in Wales.  I have been making it every year, but this is not to say that we indulge in faux meat all the time or that our meals have to be 'seitan faux 'meat' and two veg', its is actually not as I still find the texture of faux meat, especially seitan 'meat' unusual.

For a veggie Sunday Roast, I would still always favour a nutroast in place of a 'Seitan' Roast with Stuffing.  However, saying all that I do like to experiment and those of you who know me now through blogging, will know that I do enjoy experimenting in the kitchen with new ingredients, but always with fruit and vegetables.  After all, I am sure if you do your research, my humble blog would have been the first in the UK  showing the versatility of fruit and vegetables, for example putting vegetables, other than carrots, parsnips and pumpkins into desserts, but lets ignore that. 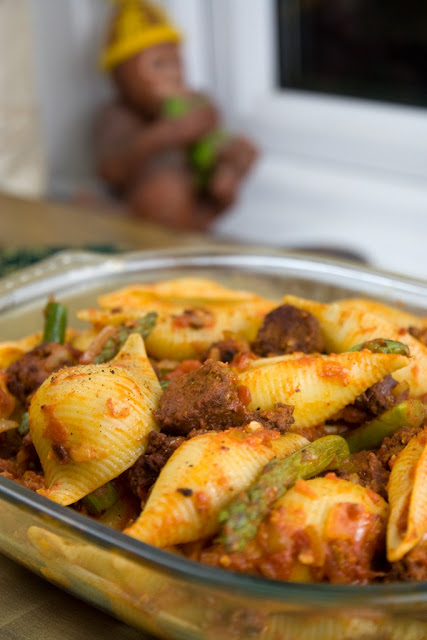 Back to the the vegan chorizo sausages recipe which makes six.  We often consume them all before the week is over incorporated into different meals.

I actually made this Spicy Tomato Pasta with Vegan Chorizo Bake last year when asparagus was in season, but you don't have to wait for the asparagus season to kick in, you can replace the asparagus with broccoli, frozen green beans or even peas. 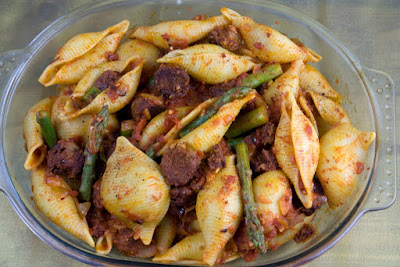 This Spicy Tomato Pasta with Vegan Chorizo Bake was really delicious and quite comforting to eat too. You can grate some cheese over the top, but it is not necessary as the dish is packed with plenty of flavour and textures. 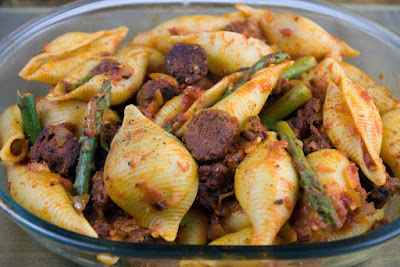 2 tablespoons olive oil
1 large onion, finely sliced or minced
2 garlic cloves, crushed
1 teaspoon oregano
1/2 teaspoon chilli flakes
1 x 400g tinned tomatoes, chopped
Salt and pepper to taste
Method
Preferably in the same pan that you used to pan fry the chorizo, heat the oil,  then add the onion and saute until very soft, then stir in the garlic, oregano and chilli flakes for a few minutes.
Then stir in the chopped tomatoes and cook for 15 minutes until it begins to thicken.
Stir in the cooked pasta and asparagus, green beans or peas and combine well for the sauce to coat.
Season to taste with salt and pepper, then carefully stir in the cooked chorizo, trying not to break it up until it is evenly distributed.
Transfer to a deep dish and bake in oven for 20 minutes.